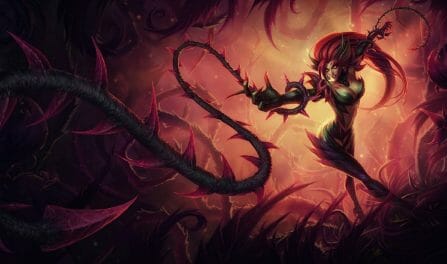 We determined our best and worst Zyra counters with stats taken from 111,293 ranked League of Legends games. We have established those champions with the highest and lowest rates of victory versus her. Furthermore, we calculated which champions can serve as great teammates to to get more wins.

As you can see above, Xerath is the strongest challenger for Zyra with a 51.0% win rate against her. Similarly, Swain and Kayle are the next greatest threats to Zyra. These two champs have win rates of 50.0% and 50.0%, respectively. You should not bring her into a match where one of these other champs has been selected.

On the other hand, if you're fighting against Azir, you can anticipate doing much better. Zyra counters them with a great win percentage of 59.0%. Similarly, you should expect to do very well when battling Gragas and Gangplank. They have the next worst winrates when countering Zyra.

Taxa de vitória: 56%
If you are interested in great champ synergies for your own comrades to raise your win rate more, look at our champ synergies above. Regardless of her chosen position, she does very well when on the same team as Nocturne. This pairing usually raises her chances of winning by 6.0%. Skarner and Dr. Mundo are also awesome champions to team up with.

If you are looking to learn more about a specific Zyra matchup, along with the finest builds to employ in that situation, please click the corresponding row in the tables above. If the particular Zyra counters you are looking for are not found below, you may view all potential counters at the above link.