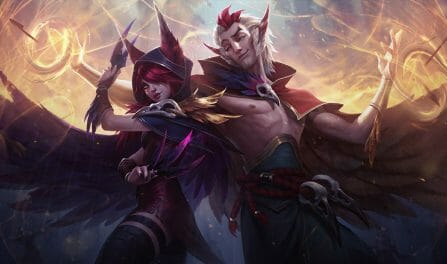 These champion statistics were calculated using 98.921 recently played, ranked Rakan games. We pull ranked game data directly from Riot's own database. Having a large number of LoL games to evaluate gives us a lot of confidence in our capability to provide precise Rakan stats. Across all games, Rakan did not do very well, with a below average win rate of 48.9%.

In the current meta, Rakan is somewhat popular. He has been selected in 3.1% of recently ranked rounds. He is rarely banned during champion select. Obviously, very few players see him as a significant threat. In the latest ranked rounds, Rakan was banned 0.2% of the time.

Thanks to Rakan's K/D/A and utility, he has a somewhat poor overall win rate. He does best in the late game, with a winrate of NaN% in that phase. Unfortunately, he does terribly in the late game, where Rakan's win rate is NaN%., The difference between his best and worst game phases is a large NaN%. This sizeable difference shows us that his power spikes and wanes in different phases of the round. Plan accordingly.

Rakan is played mostly in the support position. This occurs in [object Object]% of his rounds. Support Rakan also has the highest win rate ([object Object]%) of all positions. Currently, Rakan's meta game is focused on utility and support. Specifically, his build should mainly be centered around team fights. Furthermore, he is a decent magical damage dealer champion. Dealing physical damage is the least important part of Rakan’s gameplay.

You should expect to have to to spend a decent amount of time practicing and learning to pick up Rakan. Most League players consider he is an average difficulty champion to main. Rakan mostly does magic damage (74% of his total damage). He doesn't deal a lot of other damage types and should not be considered a hybrid damage dealer..

Rakan deals only a little damage over the course of a typical game (6540 damage). You probably shouldn't focus on developing him as a damage dealing champ to destroy your enemies. Rather, players should focus on assisting your teammates to come out on top.

If you are looking for a dominating damage dealer, then you should definitely not consider this champ. He has one of the worst kill counts in League amongst all champions. Additionally, he has a relatively typical average champion death rate (5.5 deaths). Moreover, Rakan has a high KDA ratio (2.8) with 13.8 assists.