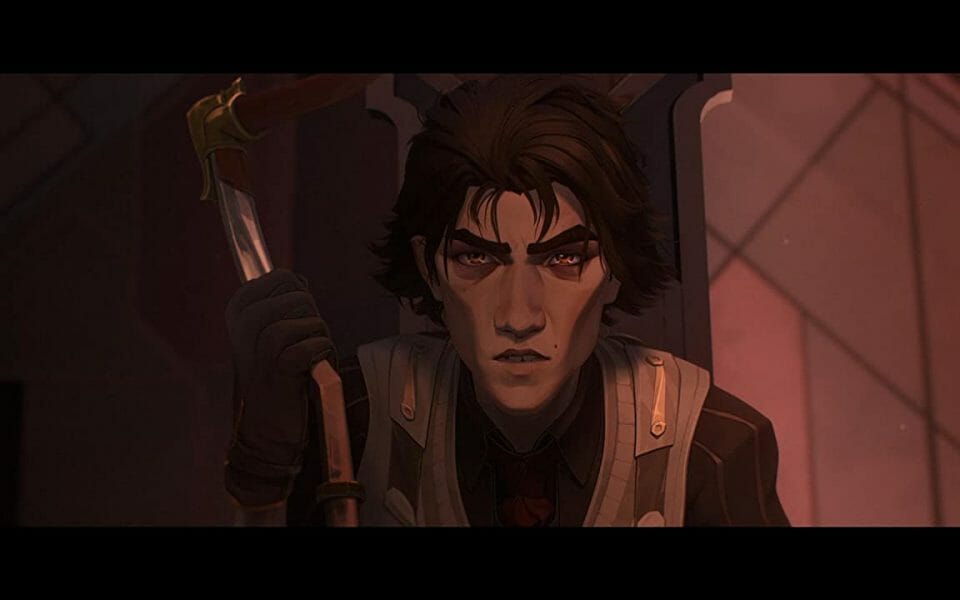 In Arcane, Viktor is strongly motivated to leave behind a great legacy. His intellect and drive make him the most significant contributor to Hextech research, even more so than Jayce Talis, its inventor. Viktor is one of Arcane’s most compelling characters. None of the show’s other characters managed to bridge the wide gap between Zaun and Piltover and strive to better the world for both societies.

We Lost Ourselves. Lost Our Dream. In The Pursuit Of Great, We Failed To Do Good.

Viktor was born and raised in Zaun, the ramshackle Undercity of Piltover. The toxic gases in the fissures young Viktor called home stunted his development. He was left with a malformed leg and a progressive, fatal disease. As a child, Viktor was socially isolated due to his disability. His isolation led him to seek a friendship with Singed, the amoral scientist who became Viktor’s mentor.

Singed told the young Viktor in Arcane that loneliness was often the byproduct of a gifted mind. Singed used mysterious, plantlike growths that glow with Shimmer’s magenta hue in his work before creating the drug. He introduces Viktor to Ryo, a mutated creature. Singed says the beast is dying and that he wants to prevent its death. “The mutation must survive,” he says.

Victor offers to help. Using the mysterious growths, Singed and Viktor kept Ryo alive long past its will to live. Young Viktor was horrified. He fled from his mentor, not returning until adulthood.

Viktor and Jayce Meet in Arcane as Young Men

As a young man, Viktor immigrated to Piltover. He worked as a research assistant to the university professor, Heimerdinger. When Heimerdinger condemned Jayce’s work for being too dangerous, Viktor stole Jayce’s notes from the university before they could be burned.

Jayce’s research showed a path to use magic to accelerate technological development drastically. His research hooked into Viktor’s ambition to leave an extraordinary legacy. He sought Jayce to aid his research, interrupting Jayce just as he considered throwing himself from a deadly height.

Viktor told Jayce to believe in himself, contrasting their two positions. “Nobody’s ever believed in me, poor cripple from the undercity. I was an outsider from the moment I set foot in Piltover. I didn’t have the benefits of a patron or a name. I simply believed in myself. When you’re going to change the world, don’t ask for permission.” This encouraged Jayce to keep trying.

Viktor and Jayce figured out how to stabilize arcane crystals, working together in secret and with Councilor Medarda’s subterfuge to hide them. Heimerdinger and other university officials came upon them just as they had used the crystals to levitate themselves and the contents of their workspace. Viktor was full of wonder, flying through the air with his new friend. Jayce named Hex Tech.

About seven years passed in Arcane, and Piltover changed significantly due to Hex Tech. The upper city became even more privileged and wealthy, but this did not trickle down to the undercity where Viktor was born.

Viktor’s ambitions became more acute as his disease progressed. He felt pressure to achieve something great in the short time he had to live. He was so consumed by work that he ignored the romantic advances of Miss Sky Young, his research assistant and a woman who shares his humble origins in the undercity. In contrast, Jayce’s attention was diverted from their work, both by his romance with Councilor Medarda and his increased political responsibilities. Viktor disliked Jayce’s distraction.

Seemingly influenced by the symptoms of his disease, Viktor had several visions about making arcane runes more adaptable. Coughing blood onto a crystal-powered rune artifact, he inadvertently mixed his blood with Hex Tech, creating the Hex Core. Victor figured out how to use the Hex Core to manipulate organic matter. Under the Hex Core’s influence, plants would accelerate their growth and change their form. At first, all of the test subjects died from the transformation.

Viktor and Jayce proudly showed the Hex Core to Heimerdinger, who demanded that it be destroyed. Hex Tech research is further threatened when Viktor’s research partner loses a valuable hex gemstone to a dangerous undercity crime organization.

Some in Piltover, such as Councilor Medarda, argued to weaponize Hex Tech against the undercity. The councilors feared Zaun might weaponize the stolen gemstone first. Viktor opposed this, saying, “Absolutely not. That is not why we invented Hex Tech. […] Hex Tech is to improve lives, not to take them.”

In Arcane, Viktor returned to Singed for Help and Vitality

It seemed that Viktor’s life would end before achieving his goal. His experiment would be cut short, and he would leave no great legacy. Under this intense pressure, he returned to his old mentor, Singed. In Singed’s laboratory, Ryo loomed larger, unmoving, and still preserved past its will to survive. “I understand now,” Viktor said, and Singed accepted him.

Singed gave Viktor a variant of Shimmer, the addictive drug that could transform ordinary people into horrifically strong monsters. This variant would help a living thing endure a radical transformation. When Viktor asked whether the drug would work on plants, Singed intimated that he knew Viktor hoped to use the potion on himself. “I know the look of a doomed man.”

Returning to Piltover from the undercity, Viktor had a chance to confide in Jayce. However, Jayce offended him with a militaristic attitude towards the undercity. Thus, Viktor kept his visit to Singed to himself.

After fortifying himself with Singed’s potion, Viktor used the Hex Core to transform himself. He lost his sickly cough. He ran triumphantly through the night, as he never could before.

Viktor returned to the Hex Core for a second transformation following this success. Unfortunately, the process was interrupted by his lab assistant, Sky Young. While working on the Hex Core, the arcane forces it emitted vaporized her. Viktor reeled in horror. Finding Sky’s papers scattered on the floor, he read them. In reading them, he discovered them to be half research notes, half love letters—to him!

Viktor’s guilt and grief deepened. He considered destroying the Hex Core but faltered. The arcane device sent some kind of painful communication directly into Viktor’s mind. Immediately after this, his weakness and disease returned.

Viktor went to a high ledge to dispose of Sky Young’s ashes. He considered throwing himself to his death, but in a reflection of their first meeting, Jayce interrupted him. Viktor did not explain his despair or circumstances, but he secured Jayce’s promise to destroy the Hex Core. Viktor laments, “We lost ourselves, lost our dream. In the pursuit of great, we failed to do good.”

The last we see of Viktor in Season 1 is at the doomed council meeting, where he supports Jayce in his proposal to free Zaun from Piltover. Whether he survived the attack is unclear.

Victor’s primary motivation was to create an incredible scientific legacy. He was naturally bright and developed a strong sense of self. His self-belief was so great that he could use it to inspire others, taking Jayce Talis from despair to greatness.

Viktor’s social isolation in childhood led him to solitary practices, and he became his own best friend. This isolation also led him to the malevolent character, Singed. When Singed tells Viktor his loneliness is due to an intelligent mind, this seems complimentary, as if to say Viktor’s disability in Arcane is not to blame. However, this may be Singed projecting his feelings onto Viktor. Viktor is usually pictured alone and perhaps views himself as someone too superior for the company of other people.

Viktor’s strong conscience and sense of self did not allow Singed to influence the boy’s personality very much. When he sees Singed mistreating Ryo, he flees. Contrast this to Powder’s total submission to Silco. Powder had little conscience nor sense of self beyond what other people told her. As a result, she became Silco’s willing accomplice in every depraved crime, and the criticisms and doubts of others haunted her.

Although Viktor returns to Singed when mortality looms, he does not totally capitulate his morals. When he tells Singed, “I understand now,” this refers to their shared sense of investment in their work. When Singed’s research was almost cut short by the death of the mutant, Ryo, Singed was willing to do anything to continue the experiment.

Viktor’s Stance on Hextech Shows His Strong Sense of Morality

Viktor’s conscience is again apparent in the debate over the use of Hextech. Viktor always argues in favor of using Hex Tech to improve the lives of ordinary people, even at the risk of releasing a project too early. When forces in Piltover argue to weaponize Hex Tech, Viktor argues strongly against it, saying, "Hex Tech is to improve lives, not to take them.”

In the Arcane TV show, Viktor serves as an effective foil to Powder, and he also serves as a foil to Jayce. Viktor had neither wealthy patrons nor an upper city background, while Jayce was gifted with both. Viktor began his career with fierce self belief, while Jayce began his in doubt, dependent on the approval of his mother, patrons, and professors. Viktor remained focused on science, while Jayce was corrupted and distracted by politics and romance. Jayce finds some happiness in a lover’s arms, while Viktor remains largely alone.

His happiness seems to depend not on other people but the success of his work—and on that, it is wholly, slavishly dependent. When his work goes well, we see Viktor float through the air, alight with joy and wonder, or whooping triumphantly as he runs through the night. In contrast, we see Viktor dragged through desperation and despair when it goes poorly in Arcane.

Viktor’s resolution comes when his conscience triumphs over his ambition. Viktor accepts that his life’s work will fail and that it must fail for the good of humanity. He will leave no scientific legacy except a warning to others to tread not where he had run.

Tropes for Viktor from Arcane

Victor’s character is an example of a “tsundere,” a character who gives a first impression of being too cold but is later revealed to be warm.

His arc also resembles that of a “Fettered Hero.” The fettered hero is a character who is bound to a quest and undergoes great suffering as a result. Victor is more flexible than the typical fettered hero because, in the end, he is persuaded to set aside his work for the greater good.

Viktor’s visions are presented as half anemic faint, half supernatural events. The use of light and sound during these visions is similar to the narrowing of sight and disruption of hearing during a loss of consciousness.