Malphite Guide: How to Play Malphite and Be Strategic 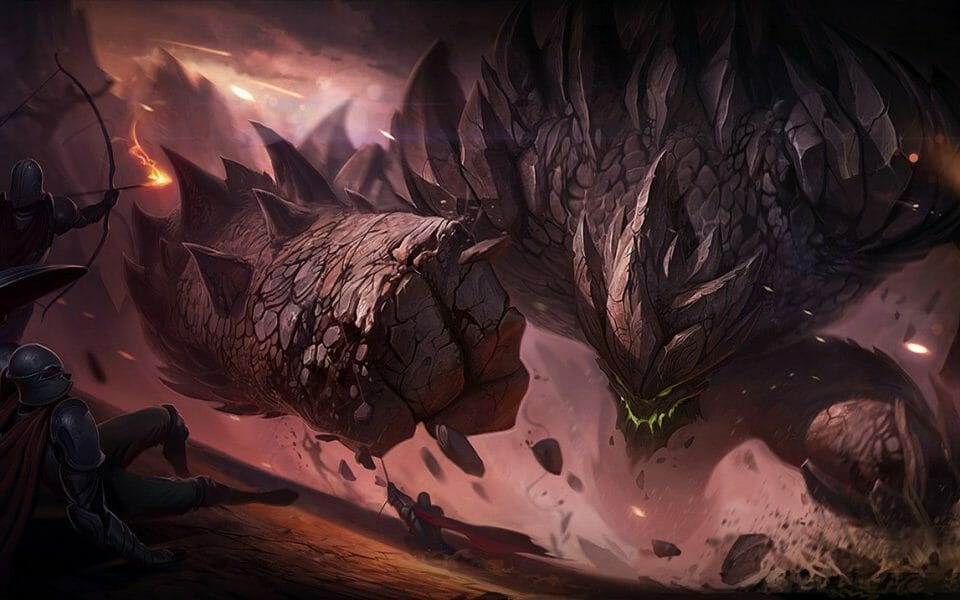 “Rock Solid!” Malphite himself sums up how awesome this champion is. Malphite is very versatile and can fit into just about any position. His ultimate may just be the best engage in the game, dashing into the midst of the enemy team and knocking up everyone and him. Additionally, he’s a solid counter to a heavy AD enemy team comp. We hope this Malphite guide will help you make the best of this fantastic league champ!

Malphite is best known for his ultimate Unstoppable Force. Malphite will dash forward a significant distance, bypassing all enemies and knocking up all foes when he lands. If you can ambush your enemies as a tight group or force them to engage in a confined space, such as in the jungle or baron pit, your ultimate can be devastating! In addition to Malphite’s amazing ult, his kit allows him to engage well 1:1 against almost any AD champion as two of his abilities scale with his armor.

Malphite’s passive grants him a sieldd based on his max health which gives him great sustain in lane and can help bolster your damage when you engage, due to its synergy with his W Brutal Strikes. If Malphite hasn’t taken damage for a brief period of time, his shield will recharge.

Seismic shard will damage and slow your enemy while giving you a boost to speed.

When Malphite punches the ground, he deals AoE damage around him that scales with both AP and armor, which allows him to deal large amounts of damage either as a tank or as a mage.

This is Malphite’s best ability. When used, he dashes forward, knocking up and damaging all enemies hit. If used at the right time, you can knock up and damage the entire enemy team, allowing your team mates to engage freely for valuable moments. If, however, you miss your targets, you will be in the middle of the enemy team with no means of escape and few other abilities. Don’t miss!

Tricks to Turning the Tide of Battle with Malphite's Ult

After you use Malphite's Ultimate ability, your opponents will either scatter or all engage on you. In either case, you may take some soft CC in order to prevent you from being effective. Grabbing some tenacity boosting items or runes may help you stay relevant after you use your Ult in a teamfight.

Summoner Spells to Equip as Malph

Teleport is very versatile and will help you get back to lane quickly. Malphite can be played in almost any position, so take whichever second ability best suites your role.

Flash is essential on almost every champion. It can save you in tight spots and can also be used offensively to Flash in and engage with your ultimate unexpectedly.

As a starting item, I would recommend either Doran’s Shield or Corrupting Potion for their added sustain early.

At low levels, mana will be a problem. All of your abilities have significant mana costs. If you are facing a ranged champion, use your Q to secure more minions rather than poke. If your lane opponent is trying to poke you down, back off, farm with your Q, and let your shield recharge.

Try to set up a gank with your jungler when you hit level 6. Don’t use your ult unless you can secure a kill.

As your kit grows, focus on buying health/armor items to maximize your tank potential and to synergize with your abilities that scale off of your tank. You can use the AoE of your W and E abilities to push the lane quickly so that you can roam and gank another lane.

You will be responsible for initiating team fights and shutting down the enemy ADC with the attack speed reduction of your E. Malphite is one of the best teamfight champions in the game right now. Don’t engage too quickly. If you can wait, try to hold out for at least 3 of your enemies grouping up, but beware enemies with spell shields or Banshee’s Veil. Once you are in the middle of the enemy team, try to cause as much chaos as possible with your AoE abilities and slow in hopes of drawing their aggro.

All of Malphite’s active abilities scale well with AP, so you may argue that he can make a great burst mage. However, we would contend that he makes a far better tank. As a burst mage, it’s all or nothing. If you miss your ultimate on a solo engage (as is more likely versus more skilled opponents), you will likely be destroyed before your other abilities, with their short ranges, can do enough damage. Additionally, during a team fight, you will be useful for only one or two abilities after you ult in before you are quickly killed without any tanky items.

Since two of Malphite’s damage abilities also scale with his armor and because three of Malphite’s abilities have CC or otherwise reduce the enemy’s effectiveness, he is a fantastic tank that can also cause significant disruption in fights.