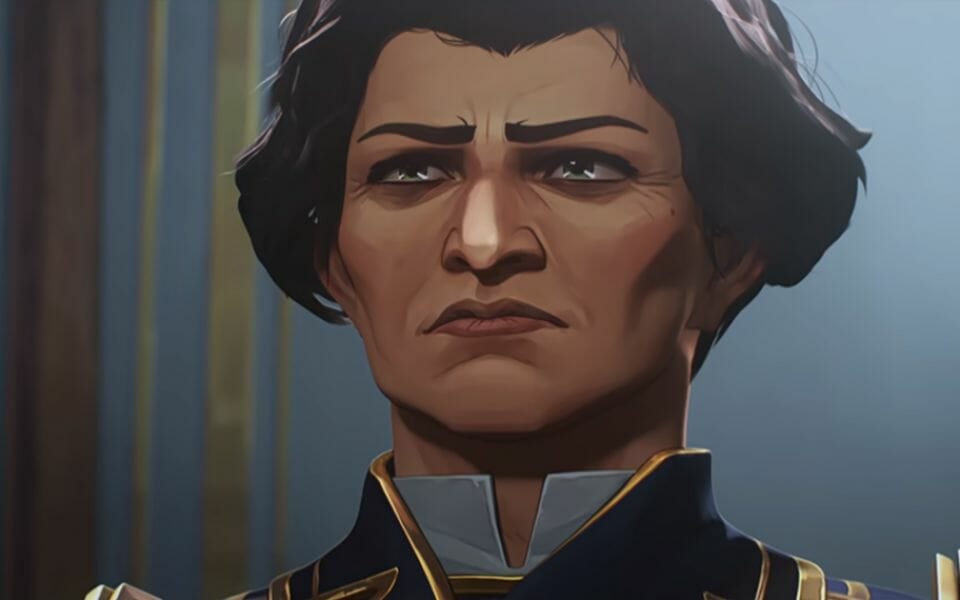 Sheriff Grayson was the leader of the Piltover enforcers in Act 1 of Arcane. Although she didn’t last long in Arcane, she had a lasting impact on two important characters: Caitlyn Kiramman and Sheriff Marcus.

"Knowing how to handle this weapon means being able to protect people. To be of service to the city. That’s trophy enough."

The earliest glimpse viewers see of Grayson’s life is a sharpshooting competition she competed in. She strode deliberately through a vast estate, taking out targets with a serious, plodding stance. At the last target, she gave her young competitor, Caitlyn Kiramman, a kindly look, and pulled her shot. As a result, Caitlyn nominally won the competition. Later, Caitlyn angrily confronted Grayson. “Did my parents pay you to you pull your shot?” she asked.

Grayson answered that the physical trophy was not important to her. “I’m an enforcer. For me, knowing how to handle this weapon means being able to protect people. To be of service to the city. That’s trophy enough. Which begs the question, young Kiramman, what are you shooting for?” This conversation had a lasting impact on Caitlyn. Grayson stood in stark contrast to the elites that Caitlyn was usually surrounded by, who were mostly parasitic rather than useful. She ended up emulating the older woman, becoming an enforcer herself.

Viewers next see Grayson investigating an explosion that rocked Piltover’s Academy district. She went to Vander’s bar, the Last drop, with her subordinate Marcus trailing behind. In Arcane, Marcus played the role of the hot-headed younger cop, while Grayson acted more world-weary and realistic. She told Marcus to go cool off, giving herself privacy with Vander and his right hand man, Benzo. She reminded them of their secret arrangement: “You keep your people off my street, and I stay out of your business.”

She warned Vander that the Piltover Council wanted to make an example of whichever Undercity resident caused a recent explosion in Piltover. She urged him to turn this resident over for the sake of preserving peace between their two cities. Unbeknownst to Grayson, Vander could never do that, since the culprits were his own children. When he refused, she did not lose her cool, but kept options open between them. She left him a capsule with which to communicate with her.

Was It a Mistake to Keep Marcus in the Dark?

She did not inform Marcus of her secret arrangement with Vander, and later, Vander concealed Grayson’s message capsule from the young hot head. Perhaps Grayson would have taken Marcus into her confidence one day, had she lived long enough to see him mature.

The Hero of His Own Movie, Marcus Sidesteps Grayson

Unfortunately, Marcus saw Grayson’s light touch as ineffective, and he took actions behind her back which ultimately led to her death. He learned the identities of the culprits from Silco, and he also promised Silco advanced notice of the time and place of their arrest. This would help Silco to abduct the Undercity leader and his family, becoming leader in Vander’s place. Whether this was arranged in exchange for money, or just information, is unclear.

Marcus returned to the Last Drop without Grayson to arrest the culprits. Vander was able to conceal his children from Marcus, which sent Marcus into a rage, doing his best to provoke Vander and everyone in the bar.

When Grayson found out about Marcus harassing her important allies, she shoved him, asking “Do you have any idea what you have done?” Of course, he did not, since Grayson hadn’t told him. “I was getting results!” Marcus quipped, still seeing himself as the good guy and the better cop. Just then, Grayson received back the message cannister she had left with Vander. It held a message from Vi that she would offer herself up as scapegoat for the explosion.

Martyrdom as a Hot Potato

Grayson took Marcus and other enforcers to Benzo’s shop to arrest Vi from Arcane. However, Vander interfered. He stepped in Marcus’s way, blocking the closet where Vi was banging, demanding to be let out. When Grayson realized Vander was offering himself up in Vi’s place, she objected. “Without you down here, it all falls apart.” However, Vander talked her around.

As the enforcers began escorting Vander topside, they were violently attacked by Silco and his forces, whom Marcus had tipped off. The brutality of Silco’s actions were beyond what Marcus had expected. Using a Shimmer-maddened mutant, Silco murdered several enforcers, including Sheriff Grayson. She was dead before they even understood what was attacking them. Marcus looked at her corpse, horrified, and objected. Silco dismissively threw money at him, both as an appeasement, and a humiliation.

The significance of Grayson’s death in Arcane

Grayson’s death became the lever by which Silco manipulated Piltover. From that time on, Marcus was compromised. He could not report Silco as Grayson’s murderer—if he had, Silco could easily have painted Marcus as a willful and paid conspirator. Using this event, threats, and money, Silco controlled Marcus, who became sheriff in Grayson’s place. It allowed him to conceal his crimes and his amassing of power from Piltover, until it was too late for them to stop him.

Grayson’s death also elevated her in the minds of those she left behind. For Caitlyn in Arcane, Grayson’s early death allowed her memory to remain an unblemished, uncomplicated inspiration. For Marcus, Grayson became a specter of his worst mistakes. Forced to hide his guilt, he praised her in public and hid the complicated nature of their relationship. In private, the late sheriff was an example he could never live up to.

Grayson fits the “mentor” archetype in Arcane. Generally speaking, a mentor is a trusted veteran, a wise person who imparts advice to a protagonist. The mentor usually serves to provide guidance to the protagonist, having a key role in shaping their character development and self-realization.

Sheriff Grayson’s face strongly resembles that of her voice actress, Shohreh Aghdashloo. Aghdashloo is famous for her beautiful manner of speaking, an Iranian accent that always sounds elegant, deliberate, and sophisticated.