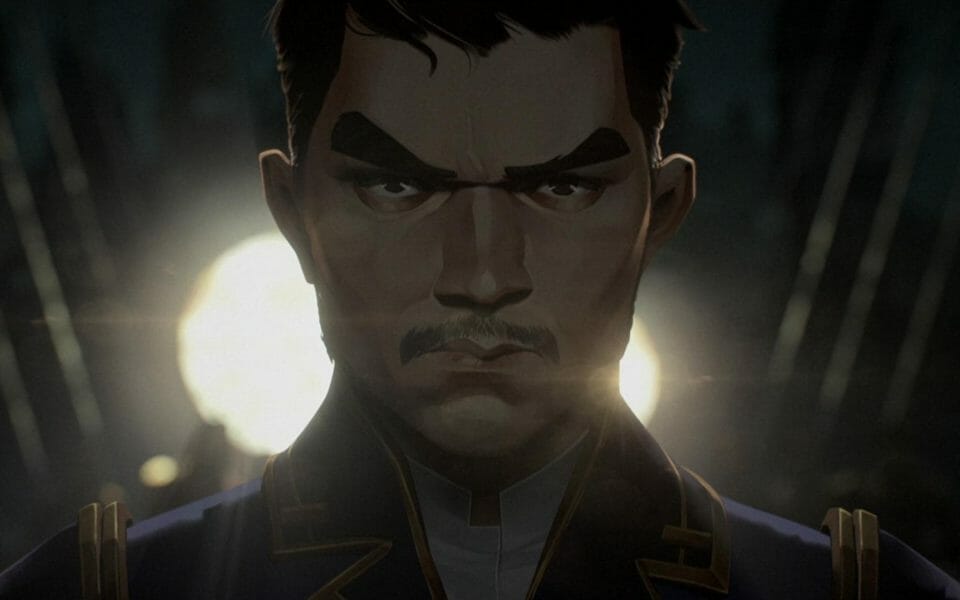 In Netflix's screen adaptation of League of Legends, Marcus plays many pivotal roles that help bring the story forward. He starts off as a very single-minded and simple enforcer, yet over time, his biases and terrible choices begin to unravel, producing one of the show's most dynamic and interesting characters to watch.

Warning: This article contains significant spoilers about Marcus and other characters in Arcane. If you have not already watched Arcane, a League of Legends story, you should definitely check it out on Netflix before continuing.

In Netflix's screen adaptation of League of Legends, Marcus plays many pivotal roles that help bring the story forward. He starts off as a very single-minded and simple enforcer, yet over time, his biases and terrible choices begin to unravel, producing one of the show's most dynamic and interesting characters to watch.

Who is Marcus in Arcane?

Marcus is a Piltover enforcer who, through his own corruption, eventually rises to the rank of Sheriff. Marcus' tale is a complex one. He faced many no-win situations and had to make very many hard decisions. While some may feel that he is one of the story's more evil characters, he is far too complex to label so simply.

Marcus as a Young Enforcer from Piltover

Viewers first see Marcus investigating the Talis laboratory explosion, trailing behind Sheriff Grayson at the Last Drop. He wore an air filter over his face, protecting himself from the Undercity’s polluted air, as well as symbolizing his utter disdain for its residents.

Marcus played the role of the hot-headed younger cop, while Grayson acted more world-weary and realistic. The Council had ordered the enforcers to turn the Undercity upside down if they had to, words that Marcus seemed to take to heart. Grayson told Marcus to go cool off, giving herself privacy with Vander.

“You keep your people off my street, and I stay out of your business,” she reminded him. She warned him that the Piltover Council wanted to make an example of whichever Undercity resident caused a recent explosion. She urged him to turn this person over for the sake of preserving peace between their two cities.

Unbeknownst to Grayson, Vander could never do that, since the culprits were his own children. Grayson left Vander a capsule with which to communicate with her. The fact that this conversation took place out of Marcus’ sight shows that he was not in Grayson’s confidence.

Marcus Chooses to Begin to Work with Silco

Marcus later returned to the Undercity on Silco’s invitation. Silco told Marcus the identity of the four children he was searching for. In exchange for what, the viewer is not explicitly told.

Marcus got backup and went straight to the Last Drop to demand the four children. He went without Grayson and without telling her. He did not understand Vander’s pivotal role in protecting peace, only seeing that his boss was going soft on the man. While Marcus and his men searched, Vander concealed both his children and Grayson’s message capsule.

When the search was unsuccessful, Marcus angrily insulted Vander and every patron in the bar, saying “You people down here are all the same...We all know there’s a crime behind every coin that passes through this place. You’re just a small man in a hole the world forgot to bury. I’m going to bury the lot of you!”

This outburst showed not only Marcus’s hot-headedness, but also his idealism. He saw the Undercity residents as an Evil to be stamped out, while he and the Enforcers were champions of Good.  This idealism would be painfully scraped out of him later.

When Grayson learned what Marcus had done, she angrily shoved her subordinate. “Do you have any idea what you have done?” she asked, referring to the fragile arrangement of which Vander was the lynchpin. “I was getting results!” Marcus quipped, still seeing himself as the good guy and the better cop. Just then, Grayson received back the message canister she had left with Vander. It held a message from Vi that she would offer herself up as a scapegoat for the explosion.

Grayson's Death Leaves Marcus with a Promotion to Sheriff

When Marcus and Grayson went to the Last Drop to arrest Vi, Vander interfered. He stepped in Marcus’s way, blocking the closet where Vi was banging, demanding to be let out. When Grayson realized Vander was offering himself up in Vi’s place, she objected. “Without you down here, it all falls apart.” However, Vander talked her around.

As the enforcers began escorting Vander topside, they were violently attacked by Silco and his forces. Marcus seemed to expect that this would happen—perhaps he told Silco the time and place of the arrest in exchange for the names Silco had given him earlier, or in exchange for Silco’s money.

Sheriff Marcus in Arcane Got in Over His Head

However, Marcus did not expect Silco’s actions to be so brutal. Using a Shimmer-maddened mutant, Silco murdered several enforcers, including Sheriff Grayson. A less hotheaded and more cowardly man might have tried to go unnoticed in the presence of a monster, but Marcus loudly objected. “This wasn’t our deal!” Silco dismissively threw money at him, both as an appeasement, and a humiliation.

From that time on, Marcus was compromised. He could not be the pure Piltover loyalist he wanted to be. He could not report Silco as Grayson’s murderer—if he had, Silco could easily have painted Marcus as a willful and paid conspirator.

By the end of the seven-year time skip, Silco spoke of Marcus as being bought and paid for. Marcus, then in Grayson’s shoes as Sheriff, had used his position to cover for Silco at every turn. He helped Silco smuggle Shimmer into Piltover and through the Hex Gates, sending the dreadful substance all over the world.

He misrepresented Silco’s position in the Undercity to the Piltover Council, leading them to believe that Silco was a harmless industrialist. He deflected enforcer attention from Silco, for example, when Caitlyn wanted to take a closer look at a smuggling crime scene. When Jinx killed Marcus’s subordinates in a terrorist attack, he helped Silco cover for Jinx in Arcane, using the Firelight vigilantes as scapegoats.

Marcus clearly resented the role Silco cast him in. At one point, he vividly fantasized about killing Silco, suicide-bomber style, in a heroic sacrifice that might redeem him for all the years of treachery. However, he did not do so. His life was not all dark, after all. He had a daughter whom he didn’t want to leave behind.

When Silco learned that Vi had returned, he decided to rattle Marcus’s cage. He would usually meet his pet sheriff in the undercity, but that time, he went uninvited into Marcus’s home, even playing with Marcus’s young daughter. Long ago, Marcus had been ordered to dispose of Vi. His conflicting motivations made a mess of things--he neither freed Vi nor killed her, but instead, hid her in a miserable prison for seven years.

In a cold fury, Silco threatened Marcus and his daughter. Marcus begged for a chance to fix his mistake, and Silco accepted, with the implication that Marcus’s daughter would die if Marcus failed.

As a double agent, Marcus felt pressure from both sides. He feared that the Piltovers would discover the things he had done. It would unravel his life and disgrace his family. On the other hand, he feared what Silco would do to him if he stopped collaborating. Ultimately, Marcus died still treading that wretched tightrope between his two masters.

When Caitlyn arrived at the blockade that Marcus was manning, she told him that she had proof of Silco’s crimes. Knowing that he would be implicated if Silco was discovered and that his daughter might be killed if he failed to protect Silco, Marcus pointed his gun at Caitlyn in Arcane.

The gun wavered in his shaking hand as he said, “I told you to leave this alone.” He seemed to be working up the nerve to pull the trigger when one of Jinx’s firelight bombs landed on his weapon. The following explosions killed him. His last words to Caitlyn were unfinished. “Tell, tell my daughter I…”

As Season 1 draws to a close, Marcus may be seen in a more forgiving light by viewers, thanks to his daughter. However, his story arc is one of corruption. He begins the season seeing himself as pure and ends it knowing he has been corrupted. He never learns to see the Undercity citizens as anything more than vermin. His life has been ruined by intertwining with theirs.

One very positive side of Marcus' character is that he always seemed to be motivated very strongly to help his daughter. Sheriff Marcus in Arcane really shows the pitfalls and tragic future awaiting those willing to comprise their morals over and over again to achieve a single purpose.

Tropes for Marcus in Arcane

Marcus embodies the “Judas” archetype. This type of character is close to a protagonist, becomes privy to important secrets, and betrays the protagonist later. Like Marcus, the namesake of this archetype, Judas Iscariot, regretted his betrayal and was dissatisfied with the payment for it. In some versions of the story, Judas hanged himself from a tree, letting unspent silver coins shower over the tree’s roots.

Marcus too lets his payment from Silco fall into the blood of his leader, Sheriff Grayson. Marcus’s name is perhaps a reference to another famous traitor, Marcus Brutus. This historical figure famously betrayed Julius Caesar, literally stabbing him in the back. In Shakespeare’s version of events, Marcus Brutus, like Sheriff Marcus, was tortured by conflicting motivations.

When Marcus held an explosive device in Silco’s office, he pulled the pin, killing both himself and the kingpin. An instant later, the viewer realizes that this scene has played out only in Marcus’s imagination.