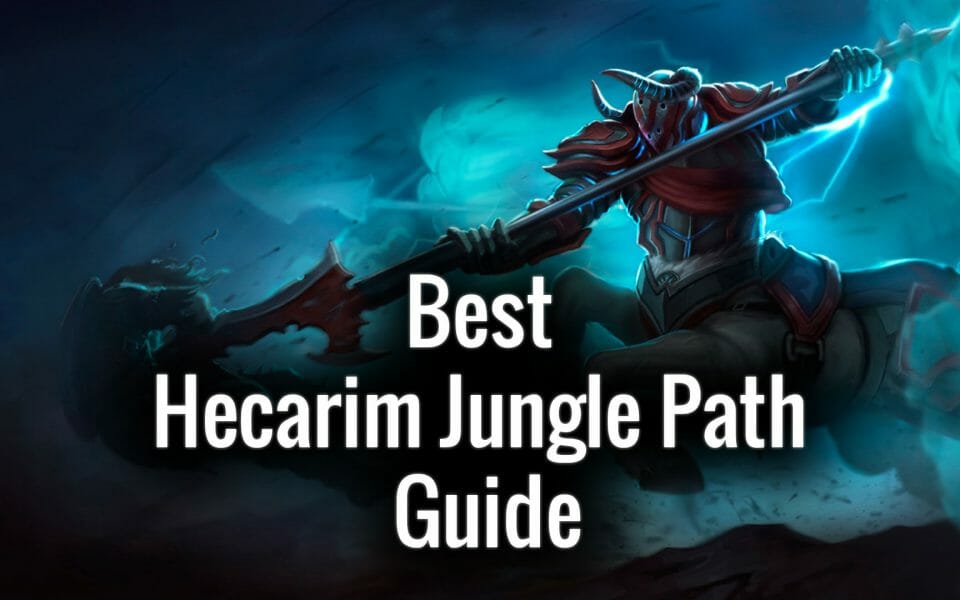 Sometimes, it can be frustrating to play a jungler. After all, many players blame junglers for their failures! But still, the position is a guilty pleasure for anyone mischievous at heart.

Players are faced with a decision: will they dedicate themselves to a particular lane, or play as a free-wheeling jungler? The key is to pick an adaptable, forgiving champion that can deal loads of damage. Hecarim fits this bill to a tee.

Who is Hecarim, and how can he be used to dominate Summoner’s Rift? This gameplay guide will teach you everything you need to know.

Hecarim is an incredibly strong jungler and an excellent team fighter. He’s also a flash when it comes to clearing jungle camps. Given these advantages, he’s a relatively easy champion to play. In any ELO you may find yourself in, jungle Hecarim is a safe choice.

Abilities to Gain on Startup that Help Hecarim in the Jungle

No matter the situation, the abilities you pick for Hecarim at the start of the game should remain the same.

You always want to go Q-E-W, maximizing your Q after the initial three levels of the game.

Ghost, Flash, and Ignite are all viable options for jungle Hecarim in League of Legends, along with the quintessential Smite. Flash is an excellent choice since it provides an escape route and can be used to set up Hecarim’s ganks. Ignite is a more aggressive option that improves your dueling strength and helps you execute your targets. But the most enjoyable one is Ghost, since it serves as both an escape tool and gap-closer.

Related Article: Hecarim Win Rate and Other Stats in LoL

Ganking is a tricky maneuver to pull off. To successfully gank, you must allow your character to wander between lanes as your teammates are dedicated to particular lanes. You must use your judgment to help the right teammate at the right time. In an ideal gank, your allies gain a numbers advantage against the opponent when you arrive, and the battle wraps up quickly.

Hecarim is a beast when it comes to ganks and chasing down his opponents. His E is a potent tool in his arsenal that helps jungle Hecarim players chase down even the fastest enemy champions. Combine it with Ghost, and there is no escape from Hecarim. His ultimate can be a game changer and can help Hecarim take down multiple opponents. His Q is his prime damage tool and should be used between Hecarim’s auto attacks, while his W sustains him in battle.

The most important note on Hecarim’s jungle paths is to maximize his damage output. You should be aware that his Q and W can be used to clear multiple camps at once. Relentlessly use your Q between your auto attacks. If you manage to keep the stacks on your Q, you will have a much better clear speed.

The optimal strategy for Hecarim is to start by attacking Red Buff, after which you should go for Golems. After defeating these two, you should have no problem killing the raptors. Try to keep your stacks up and go for the Wolf camp.

Now it’s the time to show what you have learned: can you defeat Blue Buff and Gromp simultaneously? Stand right between them and try not to pull too much. Avoid using Smite if it isn’t necessary.

Next, go for the Scuttle Crab and Smite it as soon as possible. This will buy you precious time and help you get to a full clear before your opponent.

If you achieve all this, it will be time for your first gank! Top and Mid are both viable options, but the Top lane gank is more likely to succeed since the enemy has less room to escape.

Both Red and Blue Smites are good options for Hecarim. Depending on the game setup and the enemy team’s composition, you should know that Blue Smite is better for squishier targets. At the same time, Red Smite will provide you with a better dueling force, especially against fighters and bruisers.

Regarding the choice of boots, Ionian Boots of Lucidity is the most common pick on Hec. Still, they can be substituted with Plated Steel Caps or Mercuries Treads if the enemy team has a lot of attack damage or ability-powered champions, respectively. The Mythic Item of choice should always be Turbo Chemtank, as it is the most viable option for Hecarim.

If you have achieved all the things we mentioned above, you should be ahead of the enemy jungler. This is when you try to take as many Dragons as possible. Since your movement speed with Hecarim is high, you will be among the fastest champions in League of Legends. This can help you with counter jungling in League of Legends.

Go into the enemy’s jungle and take as many camps as possible. Be aware that before level 6, Hecarim’s dueling strength isn’t very high. This can leave you vulnerable against some stronger early-game duelists. But after you have reached level 6, you can start farming champions.

In the mid-game phase, you should try to build Dead Man’s Plate and Force of Nature, as they will both provide you with durability and additional movement speed. These advantages are essential for Hecarim and his ganks' success.

Related Article: How to Counter Hecarim in League of Legends

With full items, Hecarim is a strong character in the early and mid-game. However, you should know that his advantages wane in the late-game. As the game draws to a close, the enemy ADC will likely have some form of resistance and can melt your armor.

To finish off your Hecarim build for the absolute jungling menace, you should carry on and equip him with Manamune, an excellent item for damage scaling. We also recommend Death’s Dance, which will increase armor and his dueling power. If the game is still unfinished, the good last items to acquire are Chempunk Chainsword, Thornmail, or Spirit Visage. If you cannot get these, Seryldas Grudge or Randuin’s Omen are still good picks for Jungle Hecarim in LoL.

Summary of Our Hecarim Jungle Path and Player Guide

This brings us to the end of our Hecarim Jungle Path Guide.

Hecarim is a team-fight monster and one of the best junglers. He is useful to his team due to his ultimate and AOE abilities.

His appeal comes from his fast clear speed and the fact that he is a user-friendly champion, so you don’t need a lot of games with him to become an expert. This also means that to win games with Hecarim, overall game knowledge is more important than familiarity with the character himself. You should focus on macro management and not worry about the champion’s mechanics.

With a bit of experience, you will learn how to play Hecarim in the jungle, and in most cases, you will end the game before the late-game phase begins and avoid his downfall in the later stages of the game.

Remember, the most important thing is to enjoy your chosen champion. Hecarim is the perfect character for a good time. For more advice on how to play some of the game's best jungle champions, check out our guide to playing Jungle Nocturne in League of Legends. For more generic insights into how to complete a well-informed jungle path in League of Legends, check out our linked companion guide.

Good luck and have fun!