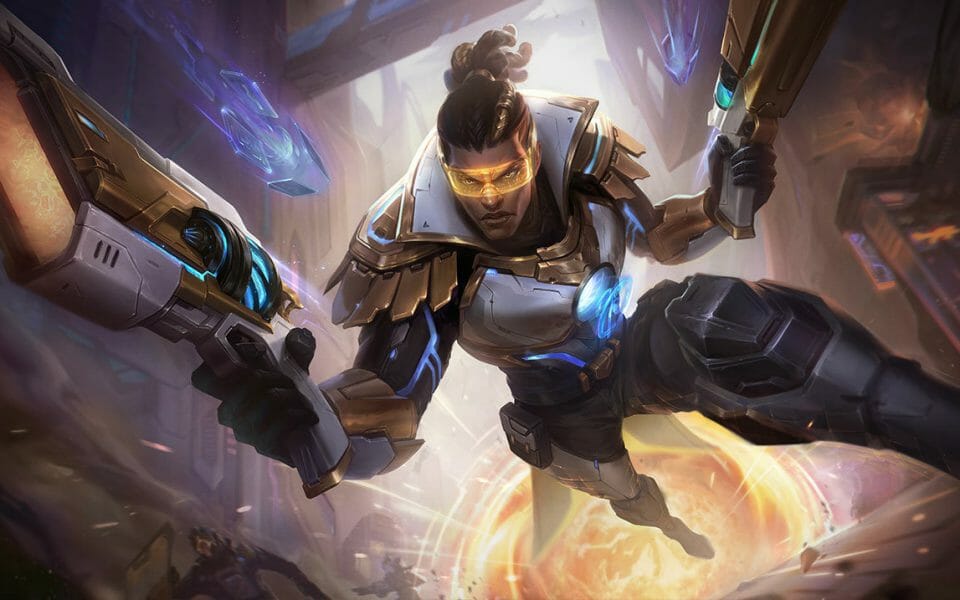 The role of the Marksman is one of the easiest to understand but the hardest to pull off. Considering their basic attack reliance in design, there aren't many Marksman Champions in existence after all of these years, but there are certainly enough to cover each significant playstyle that an AD Carry (ADC) player may be looking for!

Whether you are a mechanical god and a seasoned veteran Marksman player, or a beginner looking for a fun champion to learn, there will surely be an ADC for you. To understand the different types of AD Carries and their corresponding playstyles, let's first address the overall purpose of the renowned League of Legends ADC.

The Purpose of the AD Carry (aka ADC)

A team's attack damage carry is simply the primary source of physical-based damage on a team. Traditionally, ADCs scale well, have long-range, and rely primarily on their basic attacks as their source of damage. Additionally, these champions are inherently squishy and easy to kill to make up for their tremendous damage output potential.

This combination of high damage output and increased risk of being killed with one wrong step makes the ADC position a high-skill required role with high risk and high reward decisions to be made in every game!

Ultimately, getting ahead as the AD Carry usually correlates to snowballing advantages to get objectives on the map. ADCs deal the most damage to Dragons, Heralds, Baron, and Turrets as well!

Despite the simple principles behind the role of the ADC of using your auto attacks a lot and trying your best not to die, there are plenty of subclasses to this role that is valuable in their own right. The most common are hyper carries, early/mid-game, burst, and utility carries. This guide will go over the Champions that fit each mold and build and play each playstyle!

Hyper carries are the style of AD Carry that most players think of because they can deal insane amounts of damage with their auto attack in the late game. Yet, it takes time and investment to get them to that point. Most of these Champions are considered useless until they reach their two to three-item power spikes. You really want to grab as much gold on these champions as you possibly can!

The most common hyper-carry ADCs are Twitch, Vayne, and Kog'Maw. These Champions scale incredibly efficiently and hit insane power spikes at two or three items. Additionally, they all have some sort of opportunity to deal non-attack damage with on-hit effects from their basic attacks that help them shred through the front line tanks on the enemy team!

Much of a hyper carries damage comes from additional effects that do not always deal physical damage. For Vayne, it's her true damage on Silver Bolts. For Kog'Maw, his W provides magic damage that does a percentage of the target's maximum health! On the other hand, Twitch has both true damage and magic damage on basic attacks with his passive.

Considering these Champions have insane damage output, they are not the most mobile AD Carries for counter play. As a result, they need to position well behind their front line and keep track of the enemies' significant sources of crowd control that would inhibit the hyper-carry from dishing out damage.

Hypercarries are also sometimes found outside of the bottom lane. The most common other position for them is the top lane (though they are occasionally flexed into the mid lane). As long as they aren't bullied out of too much gold early without a support to help, they can be an excellent complement to their whole team wherever they started.

The early/mid-game AD Carries generally have their most notable power spikes from completing the first item until their third item. Having power spikes centered around these items makes them opportune carries that love fighting over Dragon and Herald and any jungle skirmishes they can find.

These Champions tend to have more mobility than the hyper carries but need some sort of early game lead to be relevant as the game progresses. These Champions are often more traditionally known as lane bullies because they have a range advantage and can quickly push the wave.

Champions that fit this category include Caitlyn, Miss Fortune, and Sivir! Caitlyn is one of the highest ranged AD Carries that takes full advantage of that advantage and stacks her headshot passive for easy trading. MF uses her Double Tap off low health minions to poke down enemies poorly positioned in the lane and uses her passive to pack a real punch! Finally, Sivir's Q and W destroy the minion waves keeping lane priority in her favor and poking out enemies with Q.

AD Carries that have one to two item power spikes often rely on critical strike chance and in the current meta, Galeforce as the Mythic, of course. Since these champions have decent poke and burst, they can use the active on Galeforce to quickly dish out more damage or get within range for the finishing shot. AD Carries that have one to two item power spikes often rely on critical strike chance and in the current meta, Galeforce as the Mythic, of course. Since these champions have decent poke and burst, they can use the active on Galeforce to quickly dish out more damage or get within range for the finishing shot.

Ideally, they will also stack damage, but not necessarily attack speed. These Champions rely on their abilities to deal damage, which is why they do well in the early and mid-game and prefer attack damage stacking rather than attack speed stacking.

These Champions are notorious for shoving the wave in the early game and poking enemies down under the tower. Usually, these Champions will come out of the laning phase with some sort of gold advantage and have priority to assist with Dragon stacking.

The next category of AD Carries is the burst carries. These Champions have also considered early/mid-game carries; however, they rely on burst damage rather than consistently bullying in the lane with range advantages. In general, these AD Carries prefer to all-in at any chance they can get.

The best burst damage AD Carries are Draven, Ezreal, Lucian, and Samira. These Champions have insane damage through a mixture of ability usage and basic attacks woven in the middle. Most champions of this type have their largest power spike at two to three items but usually require a few kills to gain enough of a lead to carry insanely well.

Draven luckily has a passive that grants him bonus gold on a kill which makes the need for several kills much less of an issue as long as he's not dying much! Ezreal has damage on all of his abilities, making him an excellent AD Carry for poking down enemies then diving in for the kill. Draven luckily has a passive that grants him bonus gold on a kill which makes the need for several kills much less of an issue as long as he's not dying much! Ezreal has damage on all of his abilities, making him an excellent AD Carry for poking down enemies then diving in for the kill.

Lucian's passive allows him to create insane damage discrepancies in trades if the opponent miss-positions even slightly! You will really want to focus on your positioning and ability usage if you want to learn how to play Lucian well. Finally, Samira's kit is designed to combo down enemies while weaving in basic attacks to allow her to use her ultimate to finish off the kill.

With all burst AD Carries, aside from Ezreal, the best option will be Galeforce and Collector or Lord Dominik's Referent as the second item. This two-item power spike is incredibly potent for one-shotting any squishy Champion. A full combo can even one-shot the tankier members on the opposing team in the mid-game when far enough ahead!

The most important thing to consider when playing burst AD carries is when to go in. All of these Champions need to patiently wait for the right moment to pull the trigger and unleash their combos. To play out the skirmishes and fights correctly, these Champions must be keeping track of any powerful sources of crowd control that can cause their aggression to backfire immediately.

The final category of AD Carries is utility carries. Utility carries require very minimal resources throughout the game because their builds don't need a lot of gold, and they can provide their team with value in some other way.

Generally, these Champions are only worth playing if the team has another significant ADC in another position. In essence, these champions are designed to enhance their teammates' abilities to deal damage while dealing some consistent damage themselves. Utility champions are still most often played in the bot lane, yet they are sometimes also flexed into the support role.

The Champions that fit this subclass best are Ashe, Jhin, Senna, and Varus. Of course, these Champions have decent damage when built with damage in mind. Yet, they fit this category because they don't do any of the other subclasses' jobs better, and they provide a bit of all-around utility, as the name suggests.

For Ashe and Jhin, it's in their range, vision, and crowd-control for picks and follow-up. For Senna, she can heal/shield allies, provide crowd control, and a method of finding picks and quick rotations around the map. Finally, Varus has an incredible ultimate for forcing enemies to peel and spread out in a team fight. This ability alone can cause an enemy to miss-position and get caught out, avoiding the spread of the snare.

Building these utility Champions is unique because they all have different options and can cover any aspects of the team composition as needed. For example, if the utility carry gets a massive lead in the early game, they can build more aggressively and stack damage items. Alternatively, they can build more supportive items with ability haste options, armor penetration, and other supporting items that can assist their team's push towards a specific win condition. Some even benefit from ability power enough to make a hybrid build viable.

Furthermore, playing these types of champs can drastically change in playstyle from match to match based on the team's needs. This subclass of ADC is undoubtedly the most macro-knowledge intensive.

However, suppose players enjoy this role and its versatility or are simply filled into the bot lane position and don't want to play such a mechanically intensive role on the team. In that case, utility carries are a fantastic option!

No matter the subclass of AD Carry you choose, the simple principles specific to each will apply to all of them but have more impact on some than others. This means that, of course, like hyper carries who need to watch for crucial crowd controlling abilities on the enemy team, other subclasses of AD Carries should also do that!

All ADC champions should also do their best to be as gold efficient as possible to reach their power spikes and know what to do with them once they get there! Overall, ADCs need to prioritize surviving to hit champions as much as possible. Work with your allies tank to make sure that tanks will peel for you.

Remember, as an attack damage carry, you are often the bulk of your team's damage output. Don't waste your damage by just focusing anyone on the entire enemy team. You should prioritize the champions in team fights that deal the most damage or have the most utility for their team.

If you are looking for any other great position guides beyond that for AD carry champions, check out our jungle pathing guide too!