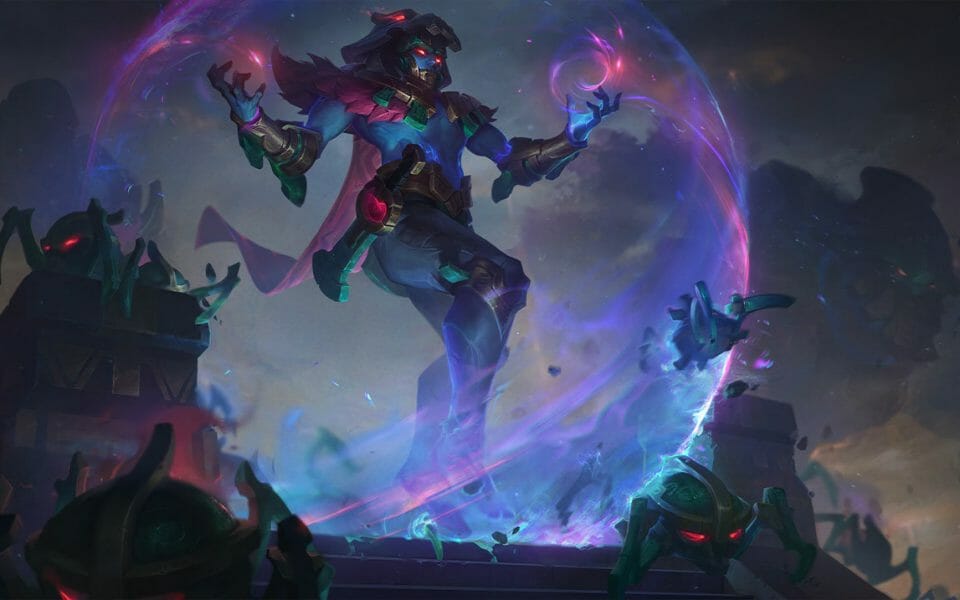 Malzahar is a fantastic mid-lane mage. He is very useful in team fights, combining massive DoT damage with great crowd control. We hope this Malzahar guide will help you make the best of this awesome champion!

Malzahar’s unique kit allows him to rapidly clear waves during the lane phase, safely deal large amounts of damage from the backline during team fights, and lockdown a priority target with Nether Grasp who could otherwise wipe out your whole team. Malzahar’s voidlings and E Malefic Visions deal large amounts of damage over time. He’s not able to burst someone to zero quickly like an assassin can, but he excels at poking and dealing a large amount of damage over the course of the entire fight.

Malzahar’s passive is one of his biggest assets. If Malzahar hasn’t taken damage for a brief period of time (minions don’t count), he gains a shield that protects him from crowd control and reduces the damage from the first ability to hit him. Many mids and supports have great CC engages, which this passive will negate.

Q - Call of the Void

Malzahar sends out an AoE silence in the shape of a line. At level 5, this is one of the strongest silence in the game with a 2-second duration. With how fast late-game combat takes place, you can effectively shut down the abilities of multiple enemies for the duration of an entire fight. It’s a little hard to land due to its slight casting delay, but if you do, it can be incredibly OP!

Tricks to Winning with Call of the Void

Malzahar can spawn pet voidlings that will prioritize targets first affected by his Ult Nether Grasp and then by his E Malefic Visions. For each spell you cast before Void Swarm, one additional voidling spawns, up to a maximum of 3, although you can have more than 3 active at once by recasting to ability before your voidlings despawn. Voidlings do a large amount of damage but can be easily killed.

This is Malzahar’s main wave clear and DoT ability. If the target dies while the ability is still active, Malefic Visions will travel to the next nearest target, resetting its timer. You can clear entire waves with one use of this ability, especially if paired with your voidlings.

Tricks to Maximizing Your Damage with Malefic Visions as Malzahar

Malzahar’s ultimate locks down an enemy champion and creates a large AoE zone beneath them that deals % max health based damage to all who enter. This is a fantastic ability, especially in situations where one person on the enemy team is carrying the others. Just lock down that priority target, and wipe them out. It’s that easy!

While Exhaust would also work here, Ignite helps you maximize your damage-dealing potential during your ultimate, especially after your level 6 power spike. Furthermore, enemies attempting to flash away with their last bit of health will be in for a surprise when the DoT from both Ignite and Malefic Visions stack to kill them.

Flash is essential on almost every champion. It can save you in tight spots and can also be used offensively to Flash in and engage with your ultimate.

As a starting item, I would recommend Doran’s Ring for the added AP, health, and mana regen.

For the best late-game item builds, check out our Malzahar build guide, which contains the best item builds versus a variety of team types (i.e. tanky, CC heavy, AD, etc…). The data there is built entirely from real match data and is updated often.

Focus on getting CS. Prior to level 4, you don’t deal enough damage with Malefic Visions to really make it worth the mana expense to poke the enemy champion. Target minions with both E and your AA to ensure it spreads. If the DoT transfers to the enemy champion after a few minions die, that’s great, follow it up with a Call of the Void to reset the DoT timer, but don’t pick them as your first target. If you do, you will lose the opportunity to have it spread, earning multiple CS per cast.

After level 4, try to poke the enemy champion down to at least half health. Don’t dive them or go all-in unless you can obviously win. Wait for your giant level 6 power spike from Nether Grasp. If the enemy is low, as soon as you get your ultimate, jump on top of them with your E-W-R combo (throw in a Q before your ultimate if you’re sure they can’t Flash away before your ultimate locks them down).

As your kit grows, focus on buying high AP items or items with CDR to maximize your damage potential. You will want to be able to make use of multiple voidling waves in combat. You E-W combo will allow you to clear entire waves of minions without having to stick around, allowing you to quickly pass through the lane, grab CS, and roam to help your teammates.

When facing off for a team fight, try to get some poke in with Malefic Visions. You don’t have to directly engage enemy champions, you can use the fact that it will travel from minion->minion->champion to damage your targets. During team fights, get your voidlings and DoT started, apply your silence on the most important target(s), and then lock down the highest priority target on the other team.

Final Thoughts on How to Play Malzahar

Malzahar is a great League of Legends champion. His kit is specifically designed to make him effective at a distance or on sudden 1:1 burst fights. If you can learn to play Malzahar well, you will advance up the League of Legends ranking system easily. Just watch out for tenacity, QSS, and other items or abilities that interfere with your abilities.

We hope you have enjoyed our in-depth Malzahar guide. Please feel free to check out some of our other great champion guides, such as our in-depth Nocturne guide.