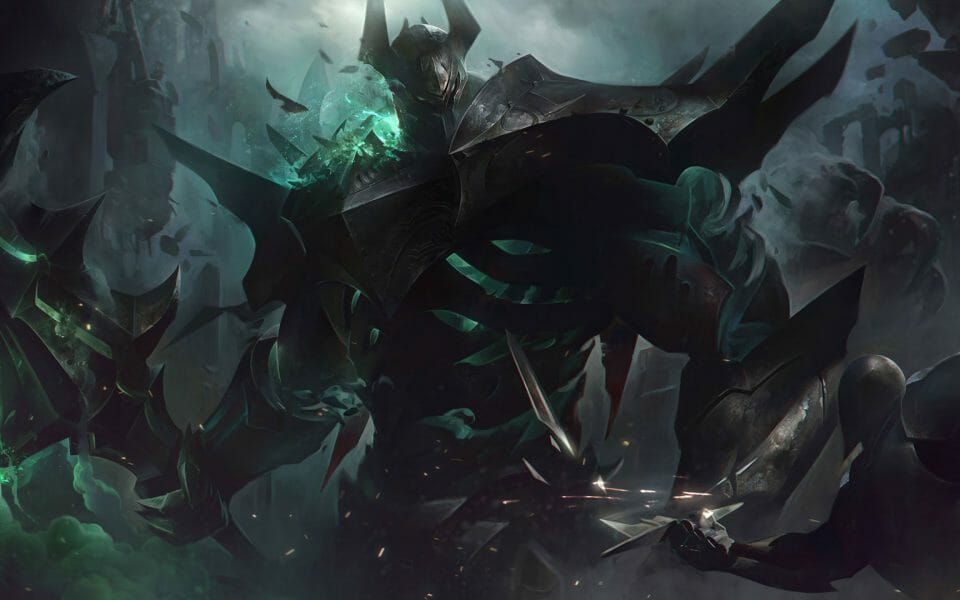 One of our favorite League of Legends champions, Mordekaiser, is finally getting a rework. While we love the old Mord, we’re excited about the changes that are coming. Keep reading to learn more about how to play with and against him for when this Mordekaiser rework hits the rift.

While some of Mordekaiser’s kit is remaining more or less the same (i.e. his Q and his shield that scales with damage dealt), many abilities are changing as a result of this rework. The biggest change is to Mordekaiser’s Ultimate. Gone is his ability to control his defeated enemies/dragons as ghosts. Instead, Mordekaiser is getting an arguably cooler power to banish a single enemy into the Death Realm for a 7 second 1 v 1 fight. This will be a great addition to a team, pulling out the enemy’s carry or support in critical team fights.

Riot released a summary of what Mord’s abilities will be post rework here. We’ve summarized the changes below with some additional commentary and considerations.

Mordekaiser’s basic attacks will deal bonus magic damage. After he hits a champion with three attacks or abilities, his passive will deal additional damage to nearby enemies while granting him a movement speed bonus until he’s out of combat. Mordekaiser will primarily be a melee champion after this update, as opposed to the hybrid melee/mage champion that he has been for a while. This passive will help keep him engaged in combat and will also hopefully help him clear lanes faster.

Mordekaiser’s Q won’t change much in this rework. Previously, his Q empowered his next three hits (with the final hit being the most powerful). This will only empower one attack. Combining this with his Darkness Rise passive seems to yield effectively the same thing. We’re glad that they’ve kept some of the current champ in this Mordekaiser rework. After all, smashing things with a giant mace is always fun!

Mordekaiser’s new W is an improved version of his old shield passive (Iron Man). His new shield will charge from both damages dealt and received. Additionally, after this Mordekaiser rework, he will be able to consume his shield to gain half as health. The HP regen offered by the active part of this ability will give him great sustain in lane and will allow him to stay in the field longer without having to back for more health.

Mord’s new E will help him close on his enemies and prevent them from fleeing. When activated, Death’s Grasp creates an ethereal claw to drag enemies towards him while also dealing damage. Additionally, his E will grant him 25% bonus magic penetration. This ability fits nicely into Mordekaiser’s new kit as a melee champion by pulling foes into melee range. Additionally, it should prove very useful during ganks and as a means of interrupting channeled abilities.

The coolest part of this Mordekaiser Rework is definitely his new ultimate. Yes, creating ghosts of fallen champions/dragons was cool, but this new ability is much, much cooler. He will be able to pull any enemy into a 1 v 1 fight in the “Death Realm” separate from the rest of your teams. If you kill your target while in the Death Realm, you will steal a percent of their core stats until they respawn, which means you will burst back into the normal world super-powered, ready to take on the rest of the enemy team! We anticipate using this to single out their carries or supports while the rest of your team obliterates the weaker or unsupported champions. Additionally, if you get ganked 2 v 1 in lane or while pushing (maybe because you didn't have great [map awareness](/blog/map-awareness/)), this will give you a chance to even the odds, potentially fighting two separate 1 v 1s as opposed to a single lopsided fight.

If you’d like to see how each ability works or is animated in this new Mordekaiser rework, check out the preview video below. Keep your eyes peeled on the PBE to see his new abilities first hand when they are first released. As always, check out our Mordekaiser build for our always up-to-date Mord stats and build.