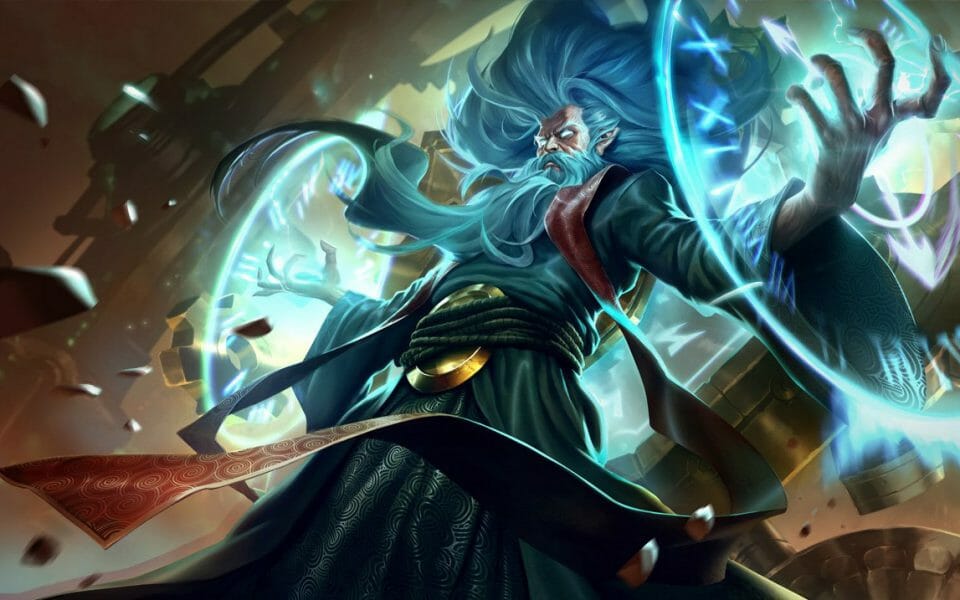 Zilean is an amazing support and mid-lane champion. He combines massive AoE stuns and decent damage with a team-fight winning ultimate. Zilean is definitely underplayed and misunderstood. We hope this Zilean guide will help you make the best of this great champ!

In League, most support champions either protect/boost their allies or disrupt their enemies through crowd control (CC). Few champions can do both, yet Zilean is one of them! Zilean’s ultimate Chronoshift Chronoshift can revive fallen teammates in the middle of a fight while his Q Time Bomb Time Bomb can apply the largest, non-ult stun in the game. Furthermore, his E Time Warp has the ability to both speed up allies as well as slow fleeing or pursuing enemies.

Zilean will generate and store a small amount of experience over time. When he has stored enough to level up an ally, he can use it to grant them enough experience to level up while receiving the same amount in return. This is a very useful passive in the early and mid games to help out allies that have fallen behind. However, late game, when most champions are already level 18, his passive is useless.

Tricks to Using Time in a Bottle

Zilean throws a high-range, skillshot bomb at his enemies. It will stick to the first enemy or ally that passes nearby. The bomb will stick to minions or monsters, but it follows this priority order:

Tricks with this Zilean Ability

Zilean reduces the cooldown of his other non-ultimate abilities by 10 seconds. Leveling this ability only reduces its cooldown. Combining this ability with further CDR can allow Zilean to output a nearly constant stream of AoE stuns and speed buffs.

Zilean’s E ability is very versatile. He can choose to either buff the movement speed of an ally (including himself) or slow an enemy. The movement modifier is very large, hitting 99% at level 5. Just watch out for tenacity on enemy champions. It can help them evade much of your slow effect.

Tricks to Using Time Warp at the Right Moment

Zilean’s ultimate allows him to place a protective ward on either himself or an ally that will revive them with a large amount of health if killed. More or less, it’s Guardian Angel in a skill with a much lower cooldown. Used at the right time, Zilean can turn the tide of a game.

How to Time Chronoshift Ability on Zilean to Save the Day

Yes, Zilean does have a slow as an ability, but Exhaust is still the best summoner spell for him. Used in combination with Time Warp to speed yourself or an ally, you are almost guaranteed to escape from even the fastest foe. Additionally, it’s damage reduction is always handy.

Of course, you should take Flash. It’s essential for almost every champion. It can save you in tight spots where speed boosts alone can’t save you. You can also use it offensively to Flash in and try to stun the enemies while they are caught off guard.

As a starting item, I would recommend either Spellthief's Edge Spellthief’s Edge or Ancient Coin Ancient Coin. Usually, I prefer to take Ancient Coin due to the large amount of mana regen it affords, which allows you to keep us the harass early.

For the best late-game item builds, check out our Zilean build page, which contains the best item builds versus a variety of team types (i.e. tanky, CC heavy, AD, etc…). The data there is built entirely from real match data and is updated often.

If your enemies don’t have a lot of sustain in lane (i.e. Soraka is not your lane opponent), poke, poke, POKE! Throw bomb after bomb at your enemy, causing them to lose CS and take damage. This will reduce their gold income and reduce the possibility they can effectively mount a counter-attack. If the enemy support can effectively heal and/or shield their teammate, don’t waste your time poking early; you will just waste your mana.

Be careful not to steal your ADC’s CS with your bombs.

When you obtain your ultimate Zilean Chronoshift Chronoshift, reassure your teammate that you’ve got their back. Give them the confidence to be a risk-taker and make the big plays, knowing that you will be there to save them if things go south.

After a tower or two have fallen and you are able to roam more out of lane, focus on effectively warding the map. Your Zilean Time Bomb allows you to peer into the brush you want to ward without risking a face check. Furthermore, your Time Warp will allow you to return to the safety of your teammates quickly.

When team fighting, use your Time Warp to either allow your marksman to kite better or to allow your tank to initiate more effectively. Stun groups of enemies or anyone approaching your backline. Cast Zilean Chronoshift to protect your ADC or mid, who will likely be dealing the majority of your team’s damage.

We hope you have enjoyed this detailed Zilean guide. For more great League of Legends champion guides, check out our Yone guide or our Nocturne guide, depending if you are looking to improve as a mid or as a jungle.