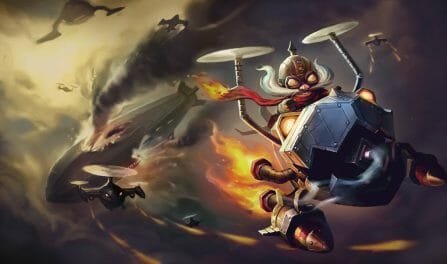 Champion Statistics and Meta Breakdown for Corki in LoL

These champ statistics were prepared using 43,714 recently played, ranked Corki matches. We pull competitive game data directly from Riot's own database. Having so many League of Legends rounds to analyze gives us great confidence in our ability to give you accurate Corki stats. Across all games, Corki did perform very well, with an above average win rate of 51.6%.

Corki has been picked very little in recent ranked League of Legends matches. In the current meta, his popularity is 1.6%. Hardly anyone sees him as a threat. He has only been banned in approximately 0.4% of League games.

As a result of Corki's K/D/A and utility, he has a pretty good overall win rate. He does best in the late game, with a winrate of NaN% in that phase. Unfortunately, he does very poorly in the late game, where Corki's win rate is NaN%., The difference between his best and worst game phases is a large NaN%. This sizeable difference indicates that his power spikes and wanes in different phases of the game. Plan accordingly.

Corki is played mostly in the middle position. This happens in [object Object]% of his matches. Middle Corki also has the highest win rate ([object Object]%) of all positions. Currently, Corki's meta game is focused on dealing damage. In particular, his gameplay should primarily be focused on physical damage. Furthermore, he is an ok magical damage dealer champion. Supporting others and crowd control are the least critical part of Corki’s kit.

You should expect to have to to spend a decent amount of time practicing and learning to master Corki. Many LoL players consider he is an average difficulty champion to use. Corki primarily causes magic damage (87% of his total damage). He doesn't deal a lot of other damage types and should not be played as hybrid damage dealer..

Corki deals tons of damage during a normal round (23,519 damage). You should focus on developing him as a damage dealing champ to destroy your opponents.

The yordle pilot Corki loves two things above all others: flying, and his glamorous mustache... though not necessarily in that order. After leaving Bandle City, he settled in Piltover and fell in love with the wondrous machines he found there. He...

If you are looking for a dominating carry, then you should definitely consider this champ. He has one of the absolute best kill rates in League amongst other champions. 'Moreover, he has a fairly typical death total with an average of 6 deaths per League game. Additionally, Corki has an average KDA ratio (2.4) with 6.9 assists.

We comb through millions of League of Legends matches pulled directly from Riot’s servers each week and analyze the data using advanced algorithms to bring you the most accurate Corki stats online. We analyze the data by tier, so you can find the most relevant Corki win rate and other stats.