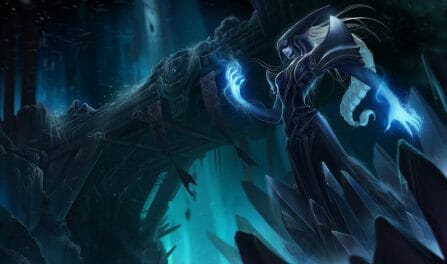 Champion Statistics and Meta Breakdown for Lissandra in LoL

To generate these Lissandra statistics, we analyzed 30,033 recent ranked League matches with her chosen. We pull competitive match results directly from Riot's servers. This gives us great confidence in our Lissandra statistics. She didn't do a great job in recent games. She has an average win rate of 49.8%.

Lissandra has been used very little in the latest ranked League of Legends games. In the current meta, her popularity is 1.0%. Hardly anyone sees her as a threat. She has only been banned in about 0.2% of League of Legends matches.

She is an average damage dealer on the Rift with 6 kills on average per match. That is the 24th highest kill count among all mids. (There are 34 champ in totals that are usually picked for in the mid position.) Additionally, she has a relatively high average death count (6 deaths; 15th out of all mids). Moreover, Lissandra's KDA is typically average with an average KDA ratio of 2.3 as well as 9 assists per match. This is the 3rd top assist count among mid champs.

Our calculated overall Lissandra win rate is the 12th highest out of all mids. She is most powerful in the mid phase of the game with a 49.8% win rate in that stage. In comparison, she has a 48.5% win rate in the late phase and a 49.8% winrate overall. There is only a small difference between these Lissandra win rates (1.3%). This negligible difference makes it clear that her power is flat during an entire game.

You will find her most often laning in the mid position. However, that is not the best position for her. The highest win rate position for Lissandra is top (50.6%). At this time, Lissandra's meta game is centered around dealing damage. In particular, her gameplay should mostly be focused on magical damage. Additionally, she is a decent support champion. Dealing physical damage is the least important part of Lissandra’s playstyle.

If you are not familiar with Lissandra’s abilities and tactics, you may find it difficult picking her up for the first time. Many competitors believe her to not be a difficult champ to learn. Lissandra mostly does magical damage (90% of her total damage). She doesn't deal a large amount of physical damage and should not be considered a hybrid damage dealer.

Lissandra deals a good amount of damage in a regular ranked game (18,394 damage). You could focus on developing her as a powerful champion to crush your enemies.

Lissandra's magic twists the pure power of ice into something dark and terrible. With the force of her black ice, she does more than freeze—she impales and crushes those who oppose her. To the terrified denizens of the north, she is known only as ''The...

We comb through millions of League of Legends matches pulled directly from Riot’s servers each week and analyze the data using advanced algorithms to bring you the most accurate Lissandra stats online. We analyze the data by tier, so you can find the most relevant Lissandra win rate and other stats.