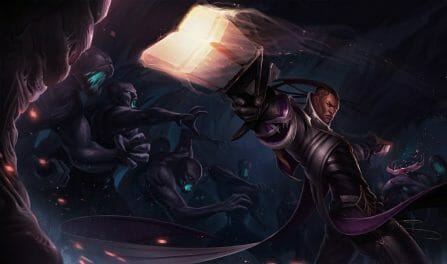 Champion Statistics and Meta Breakdown for Lucian in LoL

To generate these Lucian statistics, we analyzed 213,218 recent ranked League of Legends matches with him chosen. We pull ranked game records directly from Riot's servers. This gives us great confidence in our Lucian statistics. Across all games, he didn't perform very well, with a below average win rate of 47.6%.

In the current meta, Lucian is incredibly popular. He has been played in 9.6% of recently ranked games. He is rarely banned during champion select. Obviously, very few players see him as a substantial threat. In recent ranked matches, Lucian was banned 1.9% of the time.

As a result of Lucian's K/D/A and utility, he has a somewhat poor overall win rate. He does very well in the late game, with a winrate of NaN% in that phase. Unfortunately, he does worst in the late game, where Lucian's win rate is NaN%., The difference between his best and worst game phases is a large NaN%. This sizeable difference shows us that his power spikes and fades in different parts of the match. Prepare accordingly.

Lucian is most commonly played in the bottom position. This occurs in [object Object]% of his games. Bottom Lucian also has the highest win rate ([object Object]%) of all positions. At this time, Lucian's meta game is centered around dealing damage. In particular, his gameplay should primarily be centered around physical damage. Furthermore, he is a pretty good tank champ. Dealing magical damage is the least critical part of Lucian’s gameplay.

You should expect to have to to spend a decent amount of time practicing and learning to get good with Lucian. Most LoL players think he is an average difficulty champ to use. Lucian primarily deals physical damage (87% of his total damage). He doesn't deal a lot of other damage types and should not be considered a hybrid damage dealer..

Lucian deals a good amount of damage during a normal match (18,020 damage). You may want to focus on developing him as a powerful champ to defeat your enemies.

Lucian, a Sentinel of Light, is a grim hunter of undying spirits, pursuing them relentlessly and annihilating them with his twin relic pistols. After the wraith Thresh slew his wife, Lucian embarked on the path of vengeance—but even with her return to...

If you are looking for a dominating damage dealer, then you should definitely consider this champ. He has one of the absolute best kill totals in the game among other champs. 'Moreover, he has a fairly above average death total with an average of 6.1 deaths per LoL game. Additionally, Lucian has an average KDA ratio (2.3) with 6.6 assists.

We comb through millions of League of Legends matches pulled directly from Riot’s servers each week and analyze the data using advanced algorithms to bring you the most accurate Lucian stats online. We analyze the data by tier, so you can find the most relevant Lucian win rate and other stats.