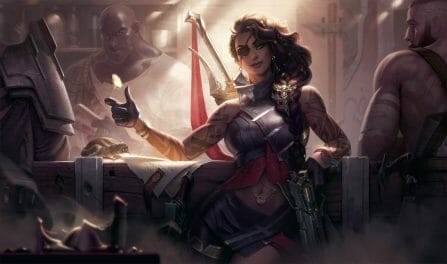 Champion Statistics and Meta Breakdown for Samira in LoL

To prepare these Samira stats, we analyzed 285,157 recent ranked LoL matches with her chosen. MOBA Champion pulls ranked match records directly from Riot's servers. This gives us great confidence in our Samira statistics. She did not do a good job in recent matches. She racked up an average win rate of 49.1%.

In the current meta, Samira is incredibly popular. She has been played in 9% of recently ranked rounds. She is very often banned during champ select. Obviously, most players see her as a real threat. In the latest ranked rounds, Samira was banned 19.7% of the time.

Because of Samira's K/D/A and utility, she has a fairly average overall win rate. She does best in the late game, with a winrate of NaN% in that phase. Unfortunately, she does very poorly in the late game, where Samira's winrate is NaN%., The difference between her best and worst game phases is a large NaN%. This sizeable difference makes it clear that her power spikes and wanes in different phases of the game. Plan accordingly.

Samira is most commonly played in the bottom position. This occurs in [object Object]% of her games. Bottom Samira also has the highest win rate ([object Object]%) of all positions. At this time, Samira's meta game is focused on dealing damage. In particular, her build should mostly be centered around physical damage. Additionally, she is a decent tank champ. Supporting others and crowd control are the least important part of Samira’s playstyle.

You should anticipate having to dedicate a decent amount of time practicing and learning to get good at playing Samira. Many League of Legends players believe she is an average difficulty champion to use. Samira primarily does physical damage (85% of her total damage). She doesn't deal a lot of other damage types and should not be played as hybrid damage dealer..

Samira deals a decent amount of damage over the course of a regular ranked round (18,329 damage). You may want to focus on developing her as a powerful champion to destroy your opponents.

Samira stares death in the eye with unyielding confidence, seeking thrill wherever she goes. After her Shuriman home was destroyed as a child, Samira found her true calling in Noxus, where she built a reputation as a stylish daredevil taking on...

She is a powerful damage dealer on the Rift with 8.2 kills on average per match. That is one of the highest kill rates amongst all bottoms. Furthermore, she has a fairly high average champion death rate (6.7 deaths). Moreover, Samira's KDA is typically average with an average KDA ratio of 2.2 as well as 6.5 assists per match.

We comb through millions of League of Legends matches pulled directly from Riot’s servers each week and analyze the data using advanced algorithms to bring you the most accurate Samira stats online. We analyze the data by tier, so you can find the most relevant Samira win rate and other stats.