Dr Mundo Support: Is it Viable? 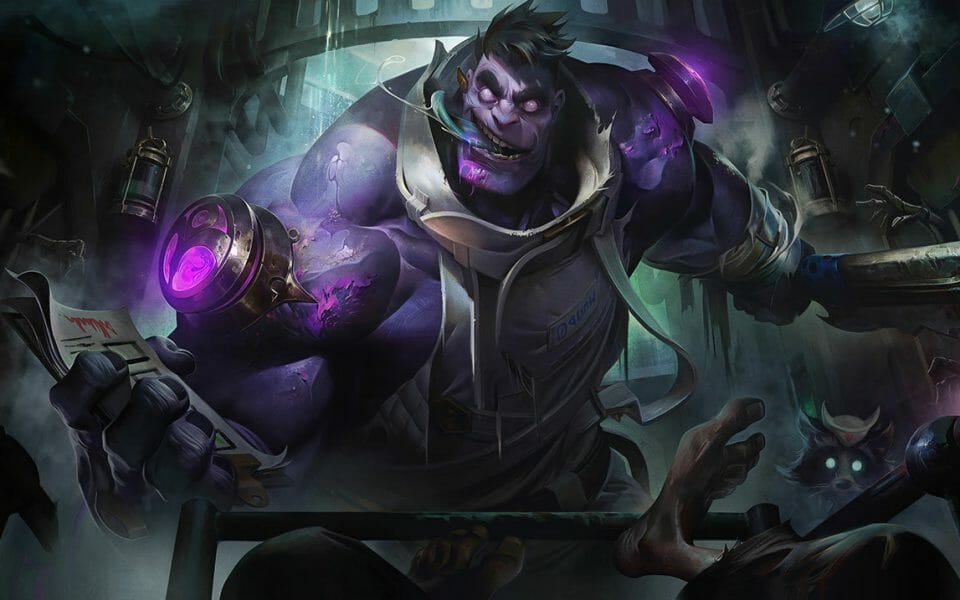 In League of Legends, Dr. Mundo is most commonly played in the Top and Jungle positions. However, he has been making inroads into the support position. That led us to ask the question: “Is Dr Mundo support viable?” Keep reading to find out.

What is Dr. Mundo Best At?

Dr. Mundo is one of the best tanks in League of Legends. His passive regeneration allows him to overcome damage between fights. At high levels, his passive sustain will also help him survive during battle.

Additionally, Dr. Mundo is also very hard to chase down. As a result of his most recent rework that made him look like a purple version of Skaar, he gained limited crowd control immunity. Beyond that, his Ult (Maximum Dosage) grants him a great deal of movement speed and regeneration. If he Ults to escape from battle, there are few champions that can catch him.

Lastly, Dr. Mundo scales well just off of tank items. His passive regeneration, Ult, AoE damage, and his on-hit damage all scale on his health total while his Q scales off of enemy HP.

As a result, a solid Dr Mundo build does not need to include ability power, attack damage, attack speed, or any other item trait bonuses to do well. He can be very effective as a pure tank. Regardless of his position, Dr. Mundo should focus on building items that increase his HP while adding other benefits.

Why Would Dr Mundo Support be Viable?

Dr Mundo support is viable because he can scale off of just tank items. Moreover, he can be very effective as a shield for his team’s carry. Furthermore, he can poke with Q to slow and deal significant damage while in lane without needing any gold to help improve its effectiveness. It scales based on his enemy’s current health.

Even if Dr. Mundo forgoes minion gold in lane, he can still be effective at all stages of the match.

Furthermore, Dr Mundo support provides great staying power in lane due to his passive regeneration. With a constant supply of health, he can keep a constant presence in lane to deter turret damage. He also maintains a greater threat that the enemy can’t ignore after a few well-placed pokes.

Moreover, Dr Mundo as support counters many enemy support picks as his CC immune negates some supports’ greatest abilities. Lastly, Dr. Mundo is a solid engage champion. He can chase down most enemies with his Q to help his carry secure the kill.

What Should I do in Lane to Support my Carry?

First off, the obvious, don’t take CS from your carry. Let them scale or you aren’t supporting them.

Beyond that, use your passive health regeneration to be a bully in lane. Be bold and poke often with your Q. It deals damage based on the enemy’s current health, so don’t be shy about using it often.

Don’t miss your bonesaw throws though, as you don’t gain back ½ of the health cost when you miss. Missing too often may cause you to take a trip back to the fountain prematurely.

Beyond bullying in lane to buy your AD carry more breathing room, use your Q to support jungle ganks. Try to land it to initiate the gank. Doing so will almost guarantee your target won’t be able to escape. You and your allies should be able to catch up and take them out quickly.

Don't forget to ward too. All champions should be warding, but as the support with a support trinket, you will have ample wards for vision control early in the game.

How Should I Build Dr Mundo Support?

Dr. Mundo’s kit and late-game responsibilities are the same, regardless of whether he started as a support or not. You must focus on increasing his maximum health and tank (i.e. armor and magic resist) to ensure you can engage and cover your carries during team fights as best as possible.

His abilities scale off of increased health and level, so he is a relatively weak champion during the early phases of the game. Don’t underestimate his power late game; Mundo gains a lot of sustain very quickly after his second and third items. In the late game, you will be a great tank who can peel for your team's carries.

While Mundo is a completely viable support champion, he may not be the best support pick available. Most notably, he lacks a lot of CC. While his Q provides a decent amount of slow, it is only a single target ability. Moreover, it can be dodged or intercepted.

Furthermore, one of his best damage abilities (Heart Zapper) does damage to nearby enemies. It is somewhat wasted if Mundo is delegated to cover the team’s backline and not dive into the enemy team.

While we don’t recommend Mundo support in most situations, it is a fun role to play to mix things up. Additionally, he may be a great pick if your team lacks other tanks and other support tanks have been banned.

If you enjoy playing support and want a great tank who is almost always a great choice, check out our Thresh guide to see how to support with this great champion.