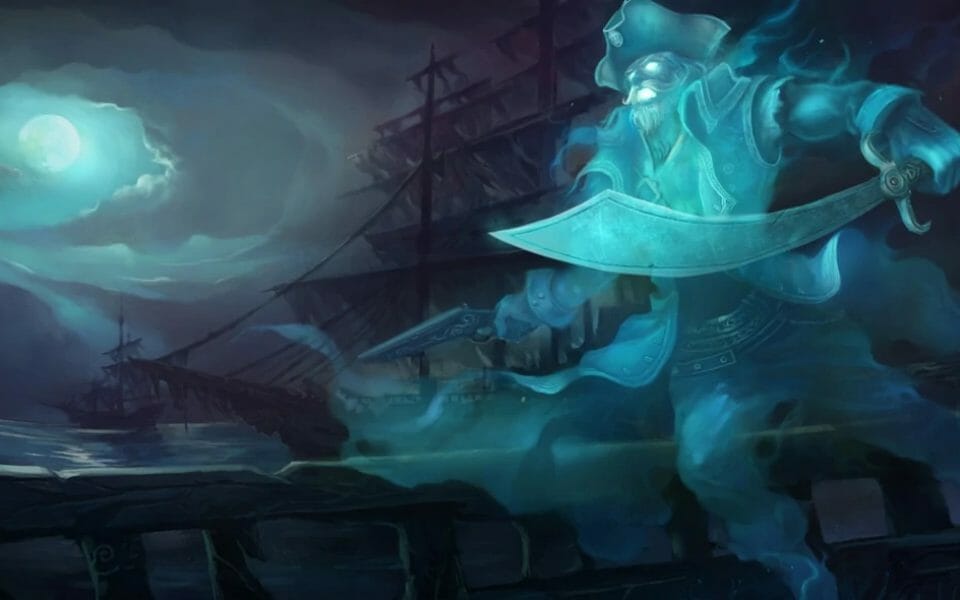 Just got Gangplank in ARAM and unsure what to do? Rolled your favorite pirate in League of Legends and want a reminder of what's optimal? You're at the right place to read up on the best Gangplank ARAM build, skill order, and gameplay tips.

In ARAM, Gangplank has three options for his runes, with two keystones and two secondary trees that work well for him. The two trees containing minor tier runes that he wants are Domination and Sorcery, while the two keystones he wants are either Dark Harvest or First Strike. Meaning that the latter lets you pick between those two secondary trees, while Dark Harvest makes you get Sorcery without needing to think about it. The three possible rune pages are then the following:

First Strike has a notably higher win rate than Dark Harvest, but Dark Harvest should still be considered, as the Inspiration keystone has two issues with it. First, its efficiency highly depends on what the other team is made of, with some champions making it near impossible to use. Second, this rune requires playing specifically for it, whereas Dark Harvest just... works, on its own - and Gangplank is already challenging enough.

In short, First Strike works best for more confident players, while the ones with less experience on the champion can default to Dark Harvest.

Finishing off the champion selection decisions with the summoner spells first. As for most champions, there is a number of choices that are all equivalent - they're situational, but you don't get to know what situation you're in in ARAM.

Flash is always a given, but as for the second slot, you have a few different summoner spells as options. Snowball is everyone's default, Ignite is the equivalent for those who like to not require aiming, Ghost is incredible in ARAM, and Heal, Barrier and Exhaust all also work just as fine.

To sum up for the summoner spells: Always get Flash, the rest is to your preference!

Skill Order for Gangplank in ARAM

The skill order is simple: Maxing Parrrley first, then Powder Keg, then Remove Scurvy (with a point in Cannon Barrage whenever possible). Gangplank may ignore Remove Scurvy until level 4 to all-in on damaging skills. For the ult upgrades, both of the damaging upgrades are good, with Raise Morale being kept for last.

Now, onto the build. The Gangplank ARAM build is more linear than its Summoner's Rift counterpart. On the main League mode, the pirate has to leverage optimal late game items with lane and splitpush presence, as well as damage and agency through ability to stand on his own.

First off, a summary in image form:

The starter items are an easy pick, despite not being one of the options for starter items offered by the automatic set. Sheen is Gangplank's best item, the two swords allow him to spend all his money and build into his first completed item.

The first completed item has to be Essence Reaver to get a good early start on Gangplank in ARAM. On Summoner's Rift, this is always a question. What sheen final item that grants a large increase to on-hit damage should I build? Essence Reaver is the best Sheen item for Gangplank come the later stages of the game, due to giving him each one of the stats that he wants most. It lets him get the Infinity Edge 60% crit chance breakpoint on 3 items instead of 4, and CDR means more uses of Powder Keg and Cannon Barrage. However, Essence Reaver does the least early damage (its Spellblade effect is weaker than that of either Trinity Force or Divine Sunderer). Besides, the lack of any defensive stats on a fragile champion limits him too much and ends up slowing his growth more than it accelerates it.

Point being - all the factors that make Trinity Force and Divine Sunderer overall better options for a typical Summoner's Rift Gangplank build don't apply to ARAM. Essence Reaver thus becomes his only choice of first item.

With the Sheen item being Essence Reaver instead of a mythic, that leaves us with a few more options for that slot. Prowler's Claw is the best choice backed by data, and the item with the best win rate on Gangplank. The active is not very useful in ARAM, but the item is built for its statline, giving AD, lethality, and ability haste, and chosen over Duskblade of Draktharr for the mythic passive giving more lethality. Duskblade of Draktharr and Immortal Shieldbow are relevant alternate options, and even Galeforce when the goal is to take out a squishy, ranged target. Prowler's and Duskblade of Draktharr give the most damage, while Shieldbow and Galeforce speed up the crit stacking.

As for the boots, Ionian Boots of Lucidity are the best, both upon purchase and for scaling. Ability haste is Gangplank's best late game stat, and it means more casts of Powder Keg and Cannon Barrage at all stages of the game. Plated Steelcaps and Mercury's Treads can be bought if survivability is needed, but the Ionian Boots of Lucidity are the best all-around option.

On Gangplank in particular, Lord Dominik's Regards benefits the barrels less than The Collector does. So, the order should be The Collector > Infinity Edge > Lord Dominik's Regards with Prowler's Claw or Duskblade of Draktharr. In case of a crit mythic, Infinity Edge should be built after Essence Reaver and the mythic (Infinity Edge should always be purchased as the item that makes Gangplank reach 60% crit chance). With a completed build, the Ionian Boots of Lucidity can be sold for Navori Quickblades.

Gangplank is one of the champions with the highest potential in League of Legends, but the presence of five direct opponents in ARAM will test the differences between that potential and the reality.

In ARAM even more than in "regular League of Legends", Gangplank has his entire gameplay revolve around his Powder Keg, with Trial By Fire being an unreliable ability rather than a constant threat. That makes it crucial to understand how to use Gangplank's barrels.

In the early game, Gangplank wants to use his barrels whenever they come off cooldown. Each Powder Keg that lands on at least one opponent is damage secured on a champion that's expected to be absent from the early game. Always rely on bushes. In ARAM, the opponents will have two or more ranged champions, the best Gangplank counters, so landing a two-part Powder Keg combo isn't a reliable option without placing the first barrel in a bush. The GP barrel guide mentioned above is a great place to learn to use E-Q-E combos! It effectively extends the range of the combo compared to doing a standard chain.

At this stage of the game, Gangplank wants to use Remove Scurvy whenever it's off cooldown for healing, and Cannon Barrage is used either for finishing off a target, or at the start of a fight.

As the ARAM goes on, Gangplank's damage gets higher, but it becomes harder for him to land barrels. Access to bushes isn't as consistent as in the early game, so the opponents will be able to react to the kegs. At those stages of the ARAM, Gangplank no longer wants to use them whenever possible, but rather make sure that they can hit - the cooldown is still high, they need to be made to matter. Cannon Barrage also starts to hit harder with level 11 and the upgrades. As for Remove Scurvy, its usage becomes more situational. It can still be used as a heal, but needs to be saved whenever the opponents look for fight, to make use of the cleanse.

Onto late game, Gangplank ends up with some of the highest damage in League of Legends, and what matters most is staying alive. Trial By Fire can start being used against tanks and anything that dives on Gangplank (Trial By Fire + Q will kill the squishier tier of champions), Cannon Barrage should be used at the start of every fight, and any barrel that connects onto a squishy champion will nearly kill them. So the most important thing is staying alive to make use of that damage (and to this end, Remove Scurvy can be spammed for heals again, now having a lower cooldown).

We hope that guide will be useful to you! If so, make sure to stay around for more Gangplank guides, including our beginner guide to Gangplank if you are just getting started with him on the Rift. Also, check out our review to find the best gangplank skins. And, let us know, is Gangplank one of those champions that you enjoy getting in ARAM? What other challenges or successes do you usually face?