How to Get More Rune Pages in League of Legends 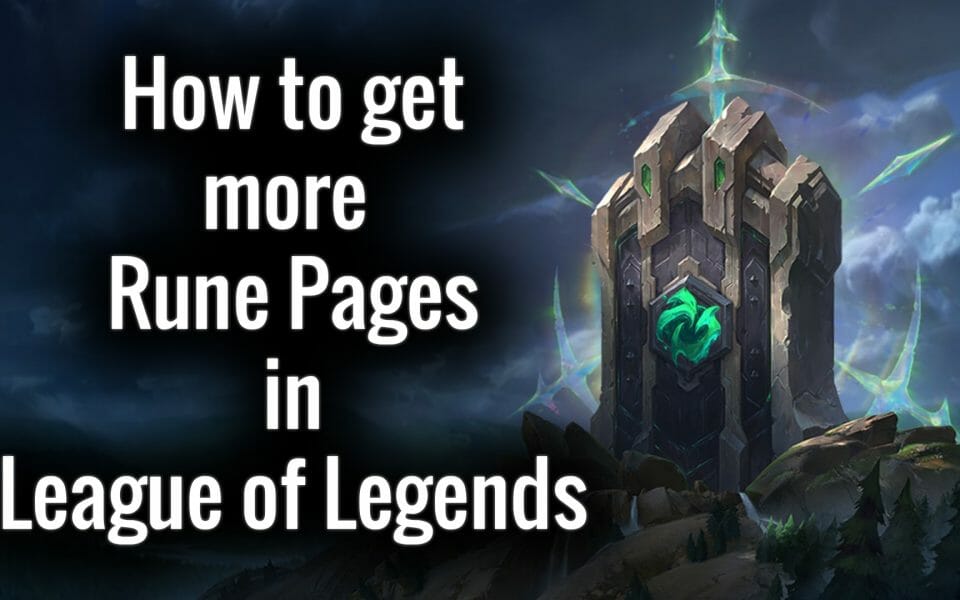 Runes have been a part of the League of Legends community since the game’s first release. For some of you that don’t know what runes are let us explain. Runes and Masteries are enhancements you customize before the game starts by choosing among the given runes and masteries that appear on the blank rune page. There are five classes of runes that appear in the game:

ADCs and some bruisers most commonly use precision runes. They grant certain attack speed and armor penetration to its champion.

Domination runes are most adored among the assassins community since they provide high burst damage in a short period of time.

Sorcery runes are most commonly used among the Mage champions since they enhance users' Ability Power, Mana Regeneration and Magic Penetration.

Resolve runes are the most efficient when used by tanks. They provide bonus hp, armor, and magic resistance.

A bunch of League of Legends champions can use inspiration runes. Usually, they are taken by jungler AP champions and supports like on a Fiddlesticks build. Yet, there is no limit on who can use them.

Once you have selected your desired class of runes, you start selecting keystones, one of them being your main keystone. After that, you can choose your second or optional class of runes that will aid your primary rune class in battle.

A Little Bit of History

The current Rune and Mastery system is old news for many LoL players. But, for us old folks that have been around since the game was released, they are still a pretty new and hot topic that we always like to discuss.

So, to better understand what I am talking about, let’s walk down history lane and show you what everything looked like back in the day.

Related Article: Why is League of Legends Not Opening on My Mac?

You see, the runes that you are familiar with today didn't look like that. They were a lot different and more complex.

As you can see in the picture, these were the old runes. They looked weird, and they were expensive! Hm? You did'’t catch that? All the runes, rune stones, or whatever you like to call them had to be purchased separately.

You had to purchase the rune pages for them. They didn't come cheap. Some runes went for as high as 2025 IP. That was the old-game currency that Riot Games substituted with blue essence.

Anyways, let’s continue. There were four types of runes:

There were 30 spots on the rune page for the runes. You could place:

The runes were also separated into tiers. This meant, since back then level 30 was the maximum level, only then you could buy tier 3 runes. This also meant that if you were lower level and went 1 vs 1 against someone that is level 30, you would be at an incredible disadvantage from the very beginning. You could also apply this in games where one player would be at a lower level than the other.

You needed a lot of time in the game to get the best runes. And even if you were at the maximum level 30, chances are that most of the time, you still couldn’t buy the runes that you would have wanted since they were costly.

The old rune system was highly complex and outdated. I still miss it sometimes, but to be perfectly honest, it was time to go.

But, what about masteries?

Related Guide: The Best Yone Build in League of Legends

These were the old masteries back in the day. Remember when I told you that there were 30 levels in League of Legends back then? The total number of masteries is 30. There were 3 classes of masteries.

They were quite straightforward. The offense was used when you wanted to go for a damage-dealing champion. The defense was used by tanks, and supports used Utility.

Another bad thing about the previous Mastery setup is that you would receive one Mastery point per level. Yeah. So if you were level 1 and went 1 vs 1 against someone on the higher level, you were screwed.

Like the old Rune system, the old Mastery system was outdated and had to go.

How to Get More Rune Pages in League of Legends

Now, the question of the day: How to get more rune pages in League. The process itself isn’t that complex, to be honest. You just have to follow these steps:

Related Article: How to Get Free Champions in League of Legends

How to Edit Rune Pages

Once we have bought a new rune page, we have to learn how to customize it correctly. Follow these steps:

Runes and Masteries are the staple symbol in League of Legends. They are helpful tools that can decide who will win the game and who will shut down their PC and go to bed crying. We are quite privileged today since all of the runes, and masteries are accessible for every player in the game, making the game more balanced and fair towards new players just starting the game. Riot has hit a home run with this "new" rune system. Good job Riot!