Pyke Lore - The Story Behind This Mysterious Champion 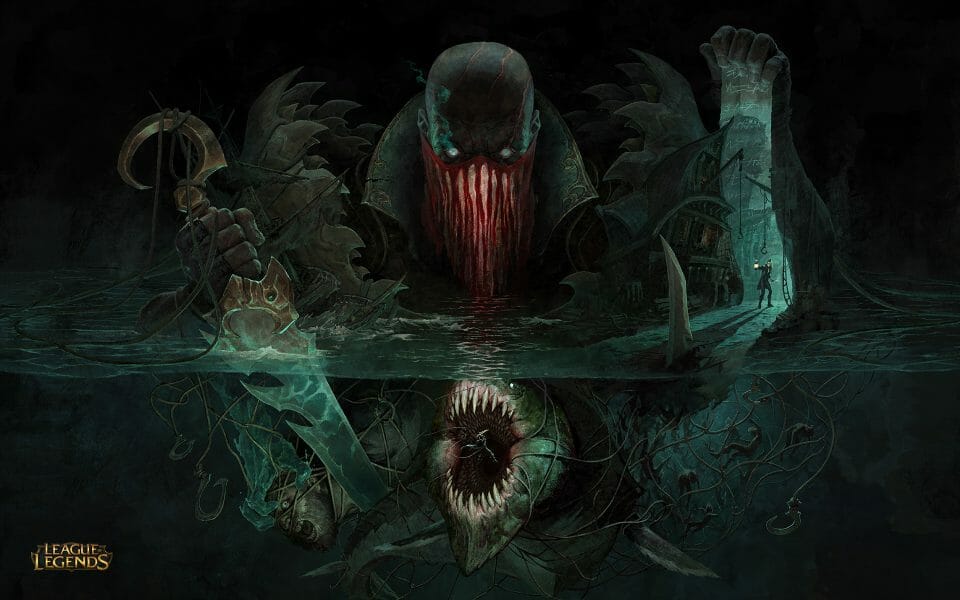 The Bloodharbor Ripper, Pyke, is one of the most mysterious champions Riot Games has ever designed. According to his official introduction by the developers, it is stated that Pyke was a renowned harpooner from Bilgewater’s slaughter docks. Still, when we read the stories Riot Games occasionally releases, we can learn much more about Pyke’s lore.

It is said that Pyke found work in the Bloodharbor district, where even the tide couldn’t wash away the blood slick that was continuously running down the wooden slip, hence his alias “The Bloodharbor Ripper.” Eventually, Pyke realized that his job wasn’t paying him well enough, and he could earn a lot more if he became part of a crew and became a hunter.

Pyke soon garnered a reputation for himself as the best hunter in town. Still, this reputation was going to lead him into devastation. It was during a hunt that Pyke finally encountered the infamous Jaull fish, and this was Pyke’s moment of glory. He jumped into the sea and went to face the most terrifying beast of the sea with his crewmates supporting him. Still, to their surprise, this wasn’t the only Jaull fish in the vicinity, and soon dozens of its allies started attacking the ship.

In desperation, the ship’s captain abandoned Pyke and ran away, leaving his most prestigious hunter to his own death. Pyke saw his teammates abandon him before the Jaull swallowed him alive. In Pyke lore, we see he came to terms with his death, but the world of Runeterra had some other plans for him in store.

Pyke opened his eyes once again, but it was something different that was awakened this time. Thousands of blue lights surrounded him as if they were watching him, and trembling echoes of something ancient and unknown entered his head, crushing it and showing him visions of everything he’d lost.

Pyke returned to Bilgewater with a thirst for vengeance and retribution against those who wronged him. The phrase “You a Captain?” became a symbol of fright among the people as Pyke was killing every captain in sight from the shadows. The locals started referring to him as the “Terror” as no one was left alive after being in contact with the mysterious serial killer.

Pyke succeeded where many others failed, striking dread into the hearts of unscrupulous businesspeople, assassins, and seafaring scoundrels alike. That is the origin and leading biography of Pyke, but we would like to share so many other details and facts with you.

How was Pyke Resurrected?

There are many theories regarding the very foundation behind Pyke’s revival. Some people believe the Nagakabouros (Illaoi’s God) resurrected Pyke. In contrast, some believe it was due to the Black Mist. However, Pyke’s origin story is unique. It tells us about something we haven’t seen before in the world of Runeterra: Swimming City.

Looking through Pyke lore, we see he was revived by the magic of Jaull fish and became part of the ocean somehow. This is why one of Pyke’s abilities shows he can swim through the air like he is underwater. Pyke repeatedly mentions the Swimming City, described as an actual city that literally floats and never stays in the same place.

It feels like Riot Games is setting up something very interesting with Pyke’s lore for the future, and Swimming City and Pyke will have a significant part to play in it. We’re excited to see what may be next.

When Pyke returned to life, he created a list of names he had to kill. However, many keen readers of Pyke’s lore noticed that the names on this list are constantly changing. Pyke appears to be utterly oblivious that the characters on his list are being altered but occasionally recalls being manipulated by a greater power.

Whatever is causing Pyke to be a murderer is far greater than we can anticipate, and even Illaoi could not deduce the exact nature behind this phenomenon. Many people wonder if Pyke will die for good or return to life if he ever completes every name on the list. According to the game’s creators and the writers of all of the Pyke lore, he will die for the greater good.

Where does Pyke Lore Say He Came from before Bilgewater?

Pyke is half-Buhru, half-immigrant as his mother was from the Serpent Isles. At the same time, his father came from the Freljord to Bilgewater. Some people believe that Pyke is being manipulated by the Void. It could be possible as he is being teased for this season’s main lore event along with Kai’sa and Ornn.

What is Pyke up to right now?

During the Sentinels of Light event, the added Pyke lore showed that he joined the crew of Senna and Lucian to ensure that Viego and the undead won’t take over the world. It was very uncharacteristic of Pyke as he never cared about anything but his list; however, it was shown in the Ruined King game that Illoai actually cured Pyke of his murderous intent, and that’s why he wasn’t trying to kill everyone in his way.

Illaoi also recognized that Pyke has a big part to play in whatever is about to happen in the future and hence became his ally.

Is Pyke’s Origin Story True or Just Fragments Inside his Mind?

It is unclear since Pyke isn’t the best source of narration if we are honest. The guy constantly talks to the voices in his head, which could be them changing his memories. We know that Pyke mentions the name “Terror” and refers to that as the ship he was betrayed on, but there is no record of a ship with that name throughout Bilgewater which makes fans think of Pyke being planted with fake memories.

We hope you have enjoyed reading our story summary of the assembled Pyke lore. We will do our best to keep it updated, especially if any interesting new content releases about the mysterious Swimming City.