How to Use Pyke Abilities (w/ Combos and Tricks) 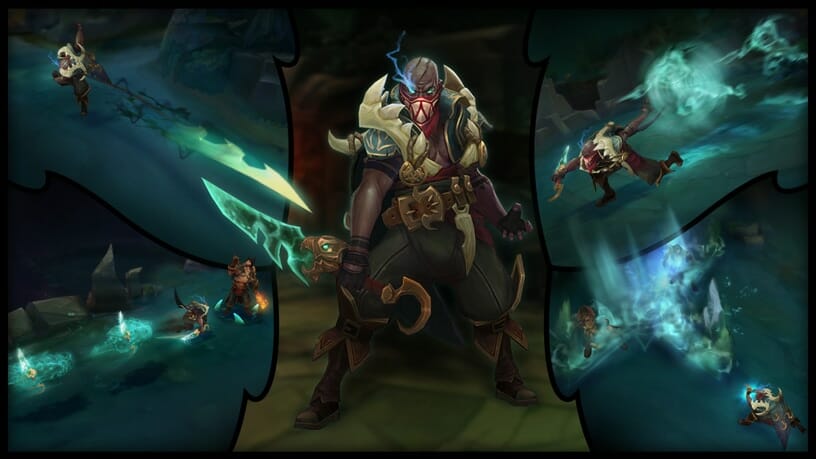 When Pyke was first released, there was outrage in the community. Most people believed he wasn’t a support champion but a traditional carry assassin. The players from a DOTA background immediately called him a Slark copy, but they couldn’t have been more wrong. Through Pyke’s ability combos, we will demonstrate that he is indeed one of the best support champions Riot Games has ever released.

Pyke’s Passive: Gift of the Drowned Ones

Another critical aspect of Pyke’s passive is converting bonus health into attack damage. Yes, if you have been building bruiser items like Black Cleaver or Anathmeas’s Chain, you won’t be getting any health but just around 35 to 50 damage instead.

It would be beneficial in some games where the passives or actives of these items would be helpful to counter the enemy team’s champions. However, it is a good practice to focus on building lethality items. The passive ability Pyke has combos very well with lethality items. Lethality items added to your Pyke build allow you to restore your gray health faster than usual!

Pyke’ passive ability saves 9 percent (+0.2 percent per 1 Lethality) of the post-mitigation damage he takes from enemy champions as gray health on his health bar. This increases to 40 percent (+ 0.4 percent per 1 Lethality) if two or more visible enemy champions are nearby. He can store up to 80 (+ 800 percent bonus AD) gray health. This caps out at 60 percent of his maximum health.

The last thing about Pyke’s passive worth knowing is that he gains one bonus movement speed while in the river. We know it isn’t a lot, but it is good to see Riot Games being true to Pyke’s lore.

Everyone uses Bone Skewer as a hook, similar to how Blitzcrank and Thresh work. Yet, many forget about the second part of this great Pyke ability. We can use this power in two modes: the hold mode that unleashes the hook to bring an opponent closer to us and the tap mode that slows an opponent in range. The tap side of this Pyke ability is a powerful tool that many players don’t use throughout the game.

Many players also make the common mistake of attempting to hook enemies repeatedly. When you are playing as Pyke, you can hold your Q for the abilities duration and not release the button if you aren’t confident of landing the hook. Releasing the hold returns 75% of the mana used, while 100% is refunded if you land a hook. However, there will be no mana refund if you miss the hook, so choose your shots wisely.

Ghostwater Dive is perhaps the most straightforward of Pyke’s abilities in League of Legends. When used, Pyke submerges himself underwater for 5 seconds. In effect, he enters camouflage and gains a 40 percent (+ 1.5 percent every 1 Lethality) enhanced movement speed that decays over time. If there are enemy champions within 1500 units of Pyke, then they are notified of his presence as he can execute them with Death from Below.

There are no hidden ability tricks for Pyke with Ghostwater Dive. Yet remember the ability scales with Lethality. Gaining lethality will give you more movement speed throughout the game.

Lastly, you may also find that you use it to sneak back into battle to execute an enemy with Pyke’s ultimate ability and share the reward gold.

Pyke's E ability is a sharp dash that stuns all of the enemy champions in the way. This ability provides substantial damage when we level up all of its points, doing 225 damage plus 100% of the attack damage you have in your inventory.

The way this ability works on Pyke can be classified into two parts. The first part is Pyke dashes toward the opponent, leaving a shadow behind. The second part is this shadow moves toward Pyke’s new location, and champions in the path are stunned. We can think of it as a J4 flag and drag but combined into a single ability.

You will often combo your Phantom Undertow ability on Pyke with either or both of his Q or W abilities. When you successfully land a hook with your Q, you will usually want to follow up by dashing past your slowed, hooked enemy using Pyke’s E ability. In this way, you will be able to execute two CCs in quick succession, which often gives your ADC carry or other allies enough time to take out your victim.

Pyke can also combo his E and W abilities by using his enhanced speed from his camouflage to get into a better position to land a stun with this ability.

Related Article: How to Play Pyke in the Jungle

Pyke cannot dash through obstacles using his E ability. Combined with his stealth, he’d likely be too powerful at counter jungling. In this way, Pyke stays more as a support champion and is encouraged to stay and support his allies.

Combining this Ability with Flash can Also Be a Great Tool

While Pyke’s E ability does provide some decent mobility with E, you will often find your opponents are just a little bit too mobile to grab, or there is a second enemy just out of range of your stun. In these situations, a well-executed flash before the shadow catches up with Pyke can result in a very large AoE stun capable of grabbing numerous enemies.

During the lane phase and late-game fights, this Pyke ability combo with Flash can prove very valuable. In other words, don’t just waste your flash. Compared to most champions, Pyke has an even greater reliance on it for initiating fights.

The ability that every support player can’t wait to use in the game while playing Pyke is his ultimate. Ever since League of Legends came, having a pentakill was the most significant honor a player could boast about. Pyke is the only support champion that can easily accomplish this feat with this ability.

When Pyke uses his ultimate ability, he damages opponents in an X-shaped trajector. If any opponents are within the execution range, then their health bar would turn red with a cross mark appearing alongside. If you execute an enemy, then the ability's cooldown is immediately reset, and you can use it to take down more opponents. If allied champions are nearby, they also get a share of the gold. This gold bonus allows your team to scale faster than the enemy LoL team.

It is very similar to Darius's ultimate, but it is a lot more satisfying as you become untargettable for that split second. The inevitability of Pyke’s ultimate ability makes it terrifying for your opponents!

However, a detail that many players are not aware of is that Death from Below does not award 'Your Cut' or the recast if the victim is saved by revival like Zilean’s ultimate or Guardian Angel’s passive.

Pyke is definitely the best assassin Riot Games has released in the last few years. We love that they got creative when making Pyke’s ability set and combos. Supports are often stuck with the choice of tank, enchanter, and mage. It’s nice to see a change here for players that prefer the more aggressive and tactical playstyle.

We hope this guide on how to use Pyke’s abilities has proved useful to you. As always, let us know if you have any questions, comments, or advice for other players in the comments below.