How to Pull Off the Best TFT Astral Mage Build 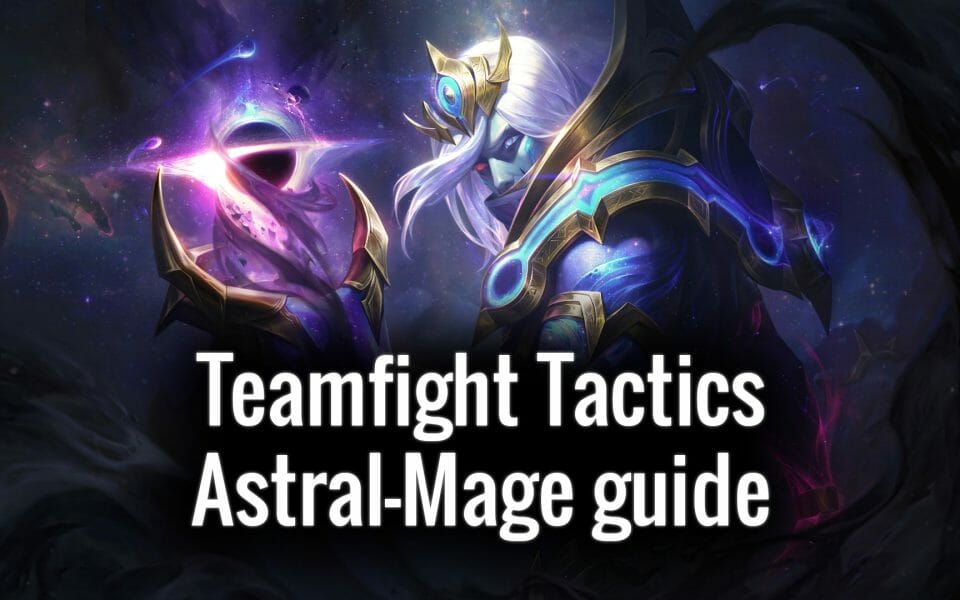 With the new Set 7 of TFT being a little over the top, no wonder some need help reaching better ELO in competitive play.

Why Astral - Mage Team Builds are Great in Teamfight Tactics

After finishing our TFT Mage build and Astral build guides, we wanted to show you an amazing mashup of these traits since they are incredibly compatible. This is no easy task, as we want you to understand everything these traits offer and why they are in fantastic harmony with one another.

The Synergy Between Astral Trait and Mage Trait

Let’s break down the facts that make Astrals and Mages so compatible with one another.

Now, why is this relevant? As you can see with Vladimir and Nami on the field, you already have 2 Astrals and 2 Mages on the field. This is extremely useful, especially in the lower levels where you have a bunch of Mage and Astral units to choose from for a small amount of gold. This allows you to have the flexibility to decide which way you are going to take the game.

It is essential to determine what your main composition will be. This also means that you need only two more champions to have both Astral and Mage traits active on the field. Since they are powerful traits, your early game strength quintuples once you have the bonuses on traits active.

Bruisers as a Part of an Astral Mage Build in TFT

As you can see, the two Bruiser trait is basically unavoidable in the Astral composition, that is, if you want to win, of course. But with Sylas on the field, it allows you to equip another of your units with Bruiser Emblem and activate the 4 Bruiser bonus without ruining the Mage composition that you assembled.

As mentioned above, Aurelion Sol with The Mage Emblem is a game changer. His ability is one of the strongest in the game, and The Mage Emblem allows him to cast it twice. This will make even the toughest of your opponents weep.

How to Build Astral Mage in Teamfight Tactics

If you are going for The Astral-Mage build in TFT, you will have the most flexibility possible in the first couple of levels when it comes to Set 7 of Teamfight Tactics. The sheer number of units that carry both of those traits is impressive. I am talking about 1 and 2 gold costing units.

As you can see the number of early game units is insane. There is so much to choose from, but you should always go for the champion that the game itself is giving you. The great thing about building an Astral Mage team comp in TFT is that you have to worry a bit less about your interest and income in TFT. This is because so many of the units are low cost.

Vladimir and Nami are must-have champions in this composition. Without them, the Astral-Mage bade in TFT can not work. After acquiring these units, your aim should be to activate both traits. The best way of doing this is to get Skarner and Lillia, with Heimerdinger being left out. When it comes to Nidalee, you should always have her on hand simply to fulfill the missing Astral trait if you ever find yourself in the position where you need her.

Save your items for your late-game units.

Mid-Game with an Astral Mage Build in TFT

Mid-game is very important for Astral-Mage composition. This is the time to buy units like Ryze, Illaoi, Sylas, and possibly Varus. I say possibly because he isn’t that great, and he can not contribute to this composition in whatsoever apart from being a bot to fill the Astral space until Aurelion Sol arrives.

You should place all the best items you have on Ryze. For Ryze to work, you need to have a specific set of items, being:

Without these items, Ryze will not be at his maximum potential and will not cause as much damage as he can. Regarding Illaoi, ideally, she would work great with The Mage Emblem, but if you have the luxury to save it for Aurelion Sol, then you would have the best-case scenario on hand. But if the situation is tight, just place it on Illaoi and hope for Magnetic Remover.

This is the time to get units like Aurelion Sol, Zoe, and Bard. Yes, Bard, you read that right. Even if Bard has no said traits, he can still make a tremendous difference to the game. With his unique trait, Bard, and his Mystic trait that he shares with Nami, Bard is the superman of TFT.

But, take the Bard thing with a pinch of salt, since if you get lucky enough to have 9 Astrals and 7 Mages on the field with the help of Augments and Emblems, then forget about Bard and go for the team build mentioned above.

Aurelion Sol works well with The Mage Emblem and Mana items, so if you have any of these to spare, just use them on him.

Related Article: How to Win with a TFT Jade Build

Examples of the Using a Late-Game Astral-Mage Composition

In the first image, we can see the late game of the Astral-Mage composition. As we near level 9, we have 6 Astrals, 5 Mages, 4 Bruisers, 2 Guilds, 2 Mystics, and 1 Bard on the field.

In this game, we have gotten lucky as we received some really nice items as well as Augments. As you can see through our Augments, we have received Astral heart and Bruiser Heart, with the URF bag that contains spatula as well. Luckily for us, we had a Tear of Goddes to spare, so we created The Mage Emblem from it when we combined it with Spatula. This means that we have had 3 of our active traits supported with Emblems.

As the end game approaches, we are waiting for Aurelion Sol which should come with level 9. Should we remove one Astral Mage or Bard?

Aurelion Sol came and with him another Mystic Emblem. A lot of you would probably suggest that the champion you should remove is Bard. This is because we already have the Mystic Emblem, and with his removal, we would have 9 Astrals, 5 Mages, 4 Bruisers, 2 Mystics, and 1 Dragon.

Final Thoughts on Accomplishing an Astral Mage Build in TFT

The end! I hope that you now understand the importance of harmony among these two traits. Just follow this guide; trust me, you won’t make a mistake. It may seem complex at first, but ironically one of the strongest compositions in the game right now is the one that is probably the easiest one to pull off. And that is this exact composition. Don’t wait a second. Go out there and try your hand at the astral mage build in TFT!

For players new to Teamfight Tactics, feel free to also check out our comprehensive TFT beginner guide. It'll teach you everything you need to know about the game.