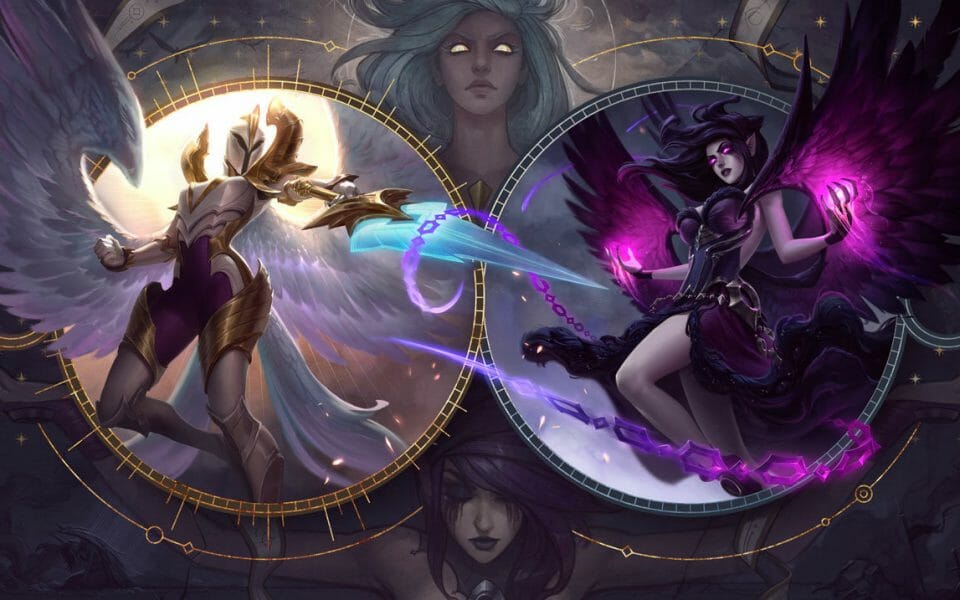 Are you a Morgana main who is looking for a great new Morgana skin to show off your skills in League of Legends? You’re in luck! We have reviewed every single Morgana skin and have ranked them all from the worst to the best Morgana skin. You’ll look amazing, binding your foes in your new, epic skin.

Morgana, the Fallen Angel, is a powerful mage champion in LoL that does very well in both mid and support roles. Her Q ability, Dark Binding, is an excellent root ability with long-range and duration. Her main combo involves rooting her foes with her Q while simultaneously casting a large DoT, AoE spell beneath their feet with her W (Tormented Shadow). Her W is also great for learning minion waves and inflicting a large AoE slow when combined with Rylai’s Crystal Scepter.

Morgana’s best ability though, is her E (Black Shield), which provides temporary CC and magic protection to herself owe another ally. This ability alone makes her a great counter to many enemies that rely on their CC, such as Thresh and Malphite.

If you’d like to learn more about how to build Morgana versus different team compositions, check out our in-depth Morgana build guide. It is updated frequently with data scraped from millions of recent League of Legends matches.

Morgana’s Sinful Succulence is a joke skin that falls flat. Her costume is changed to an angry, demonic baker. We don’t understand why this was chosen for her. None of her powers have anything to do with cooking or baking, so there was very little material in-game for Riot to draw on. 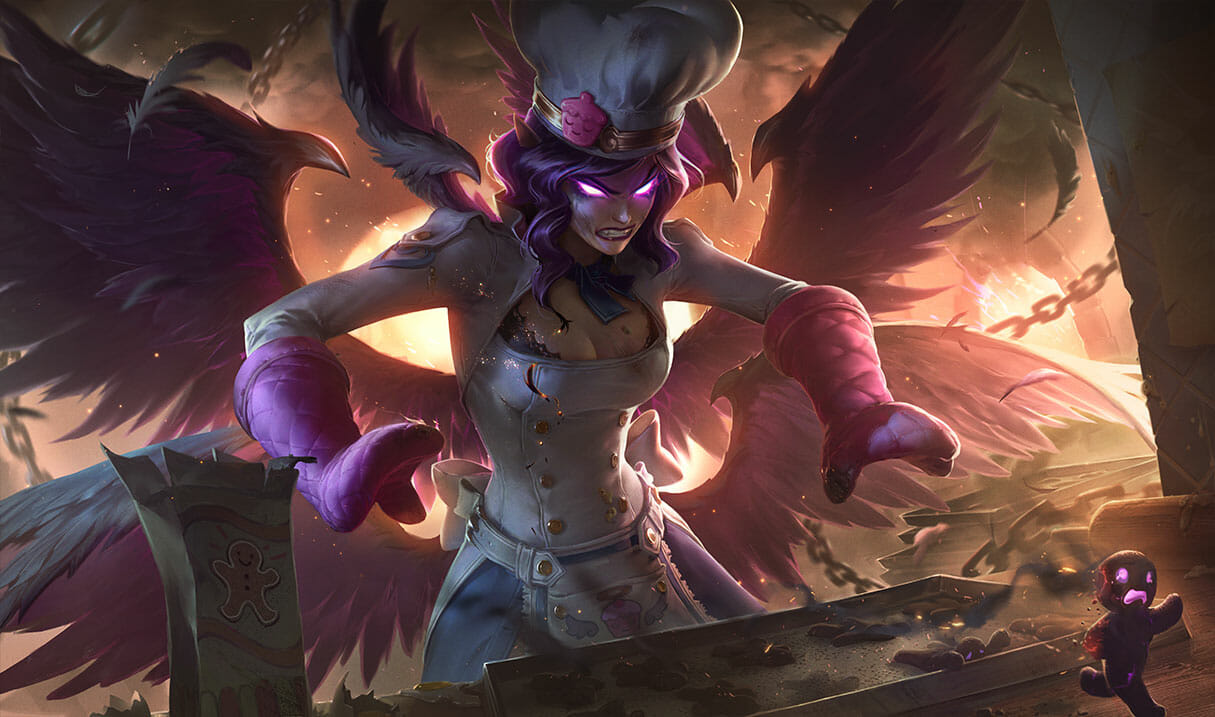 Morgana’s Sinful Succulence is a joke skin that falls flat. Her costume is changed to an angry, demonic baker. We don’t understand why this was chosen for her. None of her powers have anything to do with cooking or baking, so there was very little material in-game for Riot to draw on.

This skin just gets you a slightly different costume (with the same color theme) and humorous splash art. For 975 RP (and being a legacy skin), there isn’t anything here worth the expense or effort to get it. We think Sinful Succulence is Morgana’s worst skin.

Her exiled skin is just ok. With it, she looks like a Valkyrie in bronze armor. Her wings get a nice red tint to them, which is interesting, but it is just too much of a departure from her typical dark witch theme to be Morgana. Beyond this cosmetic change, her powers get a red-bronze tint as well. If you’re into the color scheme, you’ll like this. Still, in our opinion, there are many more interesting Morgana skins to choose from.

This Lunar skin is similar to many of the other skins in its series in that it adds a nice jade color to her outfit. We like the green, but we don’t enjoy the rest of her outfit. It’s just a basic, bland red dress. It’s an improvement over classic Morgana, but it’s not as good as the other skins left on this list.

Morgana’s Blade Mistress skin is relatively inexpensive at only 750 RP. For that reason, it is only a cosmetic improvement for her outfit and doesn’t include many new particle effects. However, it is a significant improvement for her. 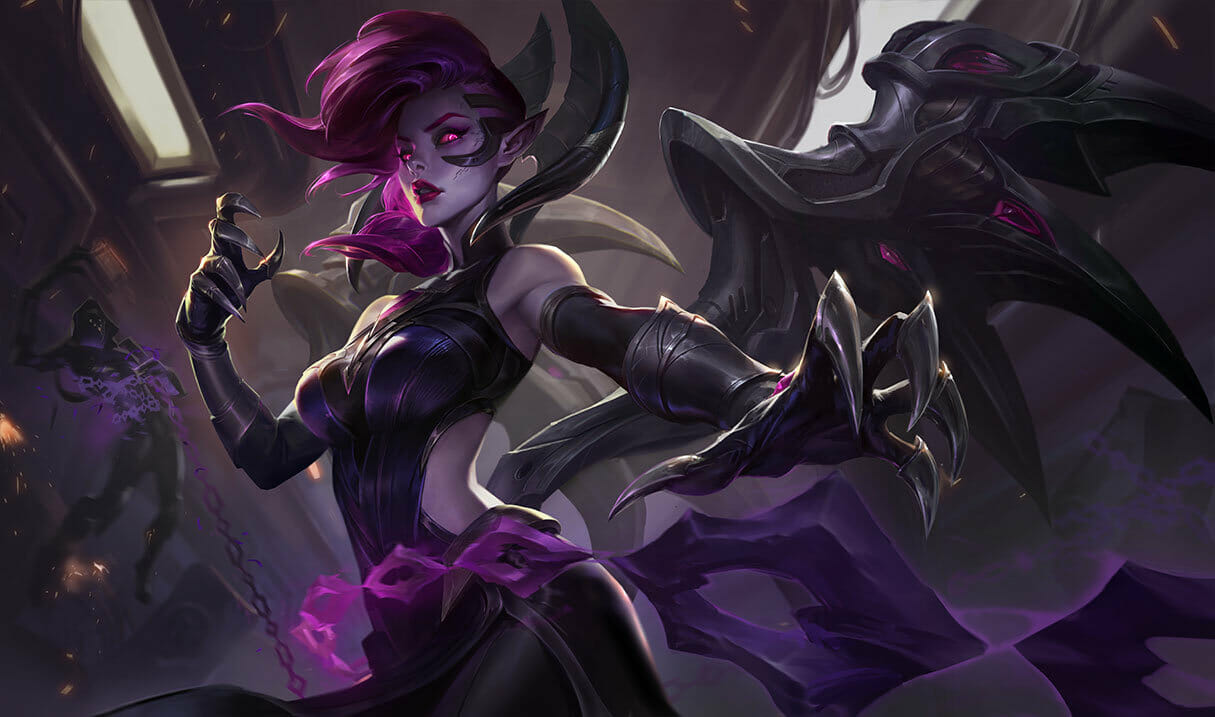 Morgana’s Blade Mistress skin is relatively inexpensive at only 750 RP. For that reason, it is only a cosmetic improvement for her outfit and doesn’t include many new particle effects. However, it is a significant improvement for her.

Ghost Bride Morgana is a great skin. It turns Morg into a creepy, ghost bride who glows with a soft, pale, internal light. When she recalls, she shows her real rage in an honestly horrifying scream. Her quick temper comes out too in her Ultimate. For 975 RP, you get a lot with this skin. If you’re looking for something creepy or eerie, this will be your best Morgana skin. If, however, you want something a little more than a cosmetic change, then keep reading to find out what other great Morgana skins are out there.

Morgana’s Majestic Empress skin brings her a very regal and beautiful look. She loses her the dark witch garb and replaces it with glowing teal/blue/purple robes. She looks a little like a good fairy out of a Disney movie.

What we like most about this Morgana skin is that it is unique and different while also being appealing. In contrast, her Exiled skin was just a little weird and poorly done. In her recall animation, she summons a golden serpent and dances with it before flashing back to base.

There are a few chromas to chose from for this skin. We strongly prefer the Heavenly Crane chroma because it brings back some of Morgana’s dark mystique. Still, it retains the beauty and majesty of this skin. Runners up for us are both the Catseye and the Ruby chromas. In particular, we like how both of those skin’s tri-color top wings look. 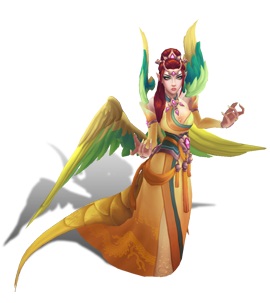 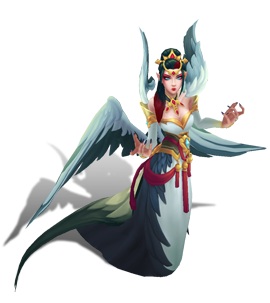 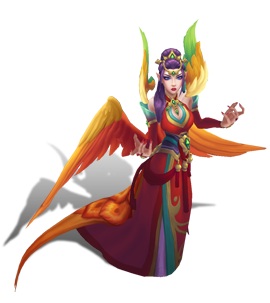 Others consider Blackthorn to be one of the best skins for Morgana. We agree that it is a great Morgana skin, but we don’t rank it as high. We like the color scheme and splash art, but the thorns thing is already Zyra’s thing. It feels weird to have another dark, angry witch casting thorns.

Additionally, her recall with this skin is pretty weak. She just conjures a gnarled tree and then takes an apple from it before disappearing back to base. We’d love to have seen something more interesting, like summoning a wall of thorns, or some other object that is actually made of thorns.

For only costing 975 RP, you get a lot with this skin. That’s why it made it into the top 3 of our Morgana skin review. If you’re a fan of the classic show Bewitched or any of the many 1990s supernatural TV dramas, you’ll find this skin entertaining. 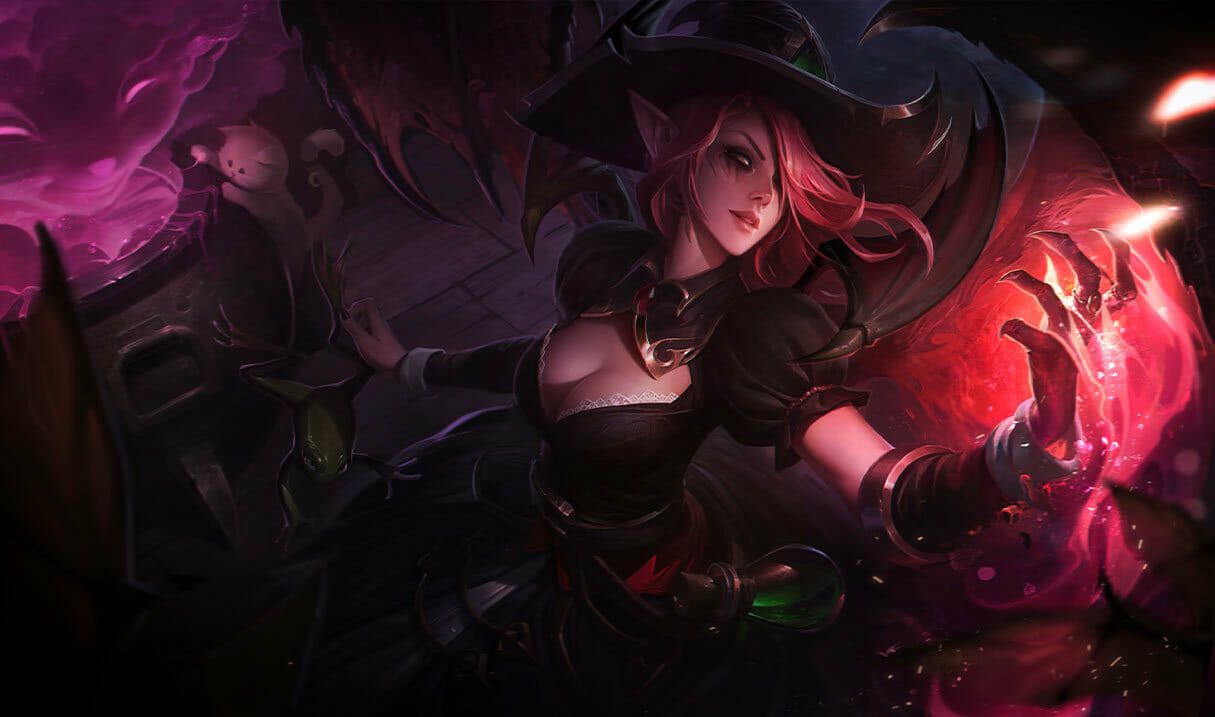 For only costing 975 RP, you get a lot with this skin. That’s why it made it into the top 3 of our Morgana skin review. If you’re a fan of the classic show Bewitched or any of the many 1990s supernatural TV dramas, you’ll find this skin entertaining.

Morgana’s dark look is replaced with a very traditional witch’s cap and robes. She keeps the purple and black of classic Morgana, but she gains a cool golden hue to many of her powers.

What we like most is that it keeps Morgana who she is fundamentally (a witch) but makes it more nostalgic and fun. For instance, when she recalls, she prepares a witch’s brew, toad included. This doesn’t have all of the bells and whistles of the most expensive skins, but we think it’s one of the three best Morgana skins given its moderate price.

2. Runner Up: Victorious (Special Event Only)

Morgana’s Victorious skin is very similar to her Majestic Empress skin. It’s just a little bit eviler but still very regal. Her recall in very unique. She conjures separate blue and yellow orbs in her hands, combines them to summon a portal, and then disappears into it.

What we like most of all is the pairing of the royal blue and golden colors on many of her powers. This is most evident in her Shield, but it is also well done on her Tormented Shadow power. When you cast W, you will conjure a dark blue pool surrounded by swirling golden feathers. Her effect changes look very refined.

This skin was given as a reward to Season 4 Gold+ tier finalists. If you weren’t playing back then or you didn’t rank that high, you can’t find it anymore. Its rarity helps catapult it to #2 spot.

Morgana’s Coven Skin takes first place! This skin is pricy at 1820 RP, but it is well worth the price if you’re seriously considering any of the others. For just a little more RP, you get a lot of additional effects.

For starters, Morgana’s Coven skin turns her into a dark and beautiful vampire. Not a pathetic CW tv show vampire, but a powerful and foreboding one. Her simple dress is replaced with an intricate set of overlapping layers with different colors and textures. Check out the picture and video to see for yourself. Look out for her great, new recall animation.

All of Morgana’s abilities gain new particle effects. In particular, we love her new Q Dark Binding’s animation. Morgana’s binding spell is replaced with an intensely red, glowing orb that sheds dark shadows as it hurtles to her target. When you land the binding, your enemy will be held in a brilliant red prison.

Her Tormented Shadow power also gets a nice, new effect. Unlike most other skins that repeat the same motif over and over in each ability, Coven Morgana mixes it up. While her Q is all about bright, glowing-red energy, her W adds the red more subtly. She calls for an intricate pattern on the ground etched in shadows on black with only a few subtle but beautiful red flowers sprouting from the ground.

When casting her Ultimate, she morphs into a demonic bird form while chaining her enemies. It happens quickly, so we grabbed a screenshot for you to check out. That’s what we love about this skin. They added so many subtle and beautiful effects that you likely won’t even notice most of them in the first few games you play.

The best Morgana skin also has one of the best chromas available for her. We love her Obsidian look. It replaces the red and white with a more macabre and twisted teal/maroon color scheme. The colors come together to make her look a little more insane and wicked. The complete package reminds us a little of American Horror Story. As a close runner up, we like the Pearl chroma as well. Its heavy emphasis on blue tints reminds us of the creepy Ghost Bride skin. 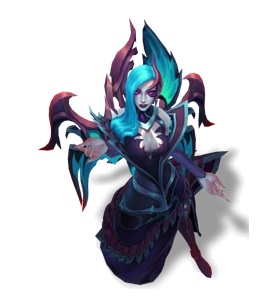 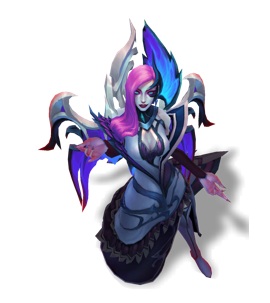 We Hope You Enjoyed Our Morgana Skin Review

Please let us know if you agree with our ratings and our best Morgana skin pick. If not, what is your favorite Morgana skin?

If you are looking for another great skin review, check out our best Katarina skin guide.