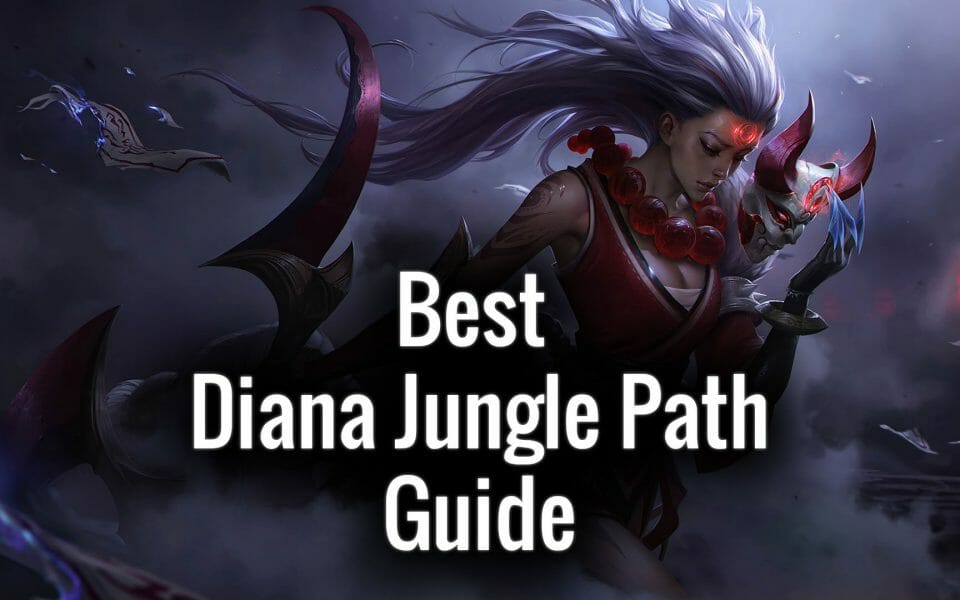 Hello and welcome to our newest Diana jungle path and gameplay guide! Diana is an ability-powered skirmisher who is excellent in the mid-lane and thrives in the jungle of the Summoner’s Rift. She is a fantastic pick that can delete her enemies in the later stages of the game. With the right preparation, she can become a 1 vs. 5 unstoppable monster. She is powerful and fun to play, so we have decided to make a guide about how to build and complete the perfect jungle path for Diana in League of Legends. Reading on will help you win many more matches!

Apart from Smite, which is an obvious choice, you can decide between Flash and Ignite. Your E provides you with a gap-closer and escape tool, but Flash can make your game even safer. The more aggressive option is Ignite which leaves you somewhat defenseless but guarantees more damage in ganks.

You can decide between Diana’s Q, Crescent Strike, or her W, Pale Cascade. Most of the players will opt for her Q ability, Crescent Strike, since it is the ability with the lowest cooldown. Her passive ability is paramount while jungling as Diana. Her passive ability grants her bonus attack speed for three seconds, and with every third strike, she does 300 times more AP damage to monsters. The scaling of this ability is incredible.

Related Article: How to Get More Rune Pages in League of Legends

While Diana’s teammates dedicate themselves to particular lanes, Diana can wander between lanes to help teammates as needed. Once she arrives, her allies have a numbers advantage against the opponent, and the battle wraps up quickly. This is called “ganking,” and Diana’s ganking potential is really high!

Diana’s ganking ability hit the roof after the update, wherein her Ultimate and E ability swapped places. This makes her a dangerous threat in every lane, even in the game's earliest stages.

The only thing you need to worry about is consistently hitting your Q. Do this, and you will be on a kill streak in no time!

The Best Diana Jungle Path in League of Legends

If you decide to start on the blue side, you should use Q, then W for abilities.

If you opt for a red side start, you should use Q, then E.

These picks don’t affect your clear speed, but they help Diana go over walls on the red side when completing her optimal jungle path. Since there is no need for scaling walls on the blue side, you get more protection with your W.

Early Game Jungle Path as Diana in League of Legends

When starting on the Red side, the first neutral monster you should approach is the Red Buff. Your team should provide you with a leash so that you can clear the camp more quickly.

After that, you should pick E and go for Golems. Once you hit the target with your Q, Diana shines Moonlight on her target, and you can cast your E. In this scenario, your E will have no cooldown. Since its usual cooldown is incredibly long, you never want to use Diana’s E without also using her Q. (The usual cooldown is more than 20 seconds! You could make tea while you wait.) That is your main gap-closer as well as your prime escape weapon.

After fighting the Golems, you should attack the Raptors. (We enjoy calling them “chickens,” as the name has stuck with us since their release!) During this stage of battle, you should try to use at least two basic attacks before using your abilities. This preparation will maximize your passive ability's output potential.

As you wrap up the red side, you will finally have access to Diana’s W ability. Go for the wolves! Try to use the bonus attack speed from your passive ability as much as possible.

Related Guide: How to Peel for Your Carry Champions in League of Legends

Moving on to Blue Buff

Once your assault on the red side is complete, you should go for Blue Buff. Since you have your Smite ready and your passive deals Area of Effect (AOE) damage, you should be confident enough to take some risks. You can take on Blue Buff and Gromp simultaneously.

While dealing damage to both of them, try to position them one next to one another, so your passive can deal damage to both of them simultaneously. Don’t forget to use your Smite. The best choice is to use Smite on Gromp, since it has more attack speed than Blue Buff. Gromp’s speed makes it a greater threat to you.

If you execute everything flawlessly, with a good leash, both camps should be cleared in just over 3 minutes. With Smite used, you should ideally be at full HP!

After this victory, you must decide whether to take on Scuttle Crab or go for a gank. Our preferred move is to attack Scuttle Crab, unless your opponent is deep inside one of your lanes. If your enemy is easily surrounded, you shouldn’t turn your nose up at low-hanging fruit!

Depending on your matchup, you can try to counter-jungle or go for your first recall.

The first time you go back to base, you should buy boots. Next, decide if you want to acquire the Hextech Rocketbelt or Nashors Tooth as your first item. Both of them work exceedingly well in a Diana build. Hextech Rocketbelt is an incredible first item on jungle Diana, since it provides yet another dash to her arsenal, and you also get bonus movement speed.

As you approach mid-game, your most important objective is to reach level 6 before your jungle opponent can do so. This way, you will dominate both of your jungles, you will gank more successfully, and you will have the opportunity to take Rift Herald or Dragon for your team.

Continue Diana's usual jungle path, which will seem almost effortless at this point. Try to ward critical points of your map with your warding trinket or to clear enemy vision if you go for the red trinket.

Once you reach level 6, you should gank with abandon! With your passive ability and Conqueror stacking, Diana is a damage-dealing monster. If you manage to hunt down and execute the enemy jungler, you should be able to take solo Dragon or Rift Herald at level 6 and above.

On your recall, if everything went according to plan, you should complete the Hextech Rocketbelt. Additionally, acquire the Sorcerer’s Boots and Nashor’s Tooth as your mid-game items.

At this point, the jungle is there for you to farm gold with no effort, but if you have followed these instructions, you should be farming champions by now.

Your late-game task is to help your team with objectives and defeat as many Legendary monsters as possible.

Diana is a very powerful split-pusher with a lot of mobility and ways to escape. Use this to help your team push through the enemy base and win the game!

Diana is a champion that is weakest in the early game. This doesn’t mean that she is a weak early-game champion–she is better than average at the start. We refer to the fact that her late-game abilities outshine her usefulness in the early game. Diana starts well and becomes unstoppable as the game progresses.

Diana is one of the hottest junglers in League of Legends. She has been around for quite some time, but her jungle game got an overhaul with a fortuitous update. The swap between her ultimate and E ability made her much stronger in the early game, with her late game remaining untouched. She is one of those champions with very high carry potential and can lead her team to victory with little to no effort.

Following this guide will teach you how to execute Diana’s Jungle Path in the best way possible. With a little practice, you will climb through the ranks and be able to compete with "big boys." Go forth and conquer in the name of the moon! If you are finding that Diana jungle is sometimes too much of a challenge, check out our Diana counters page that will show you the champs that counter her and she best counters!

For more general tips and advice, check out our guide on how to get better at League of Legends.