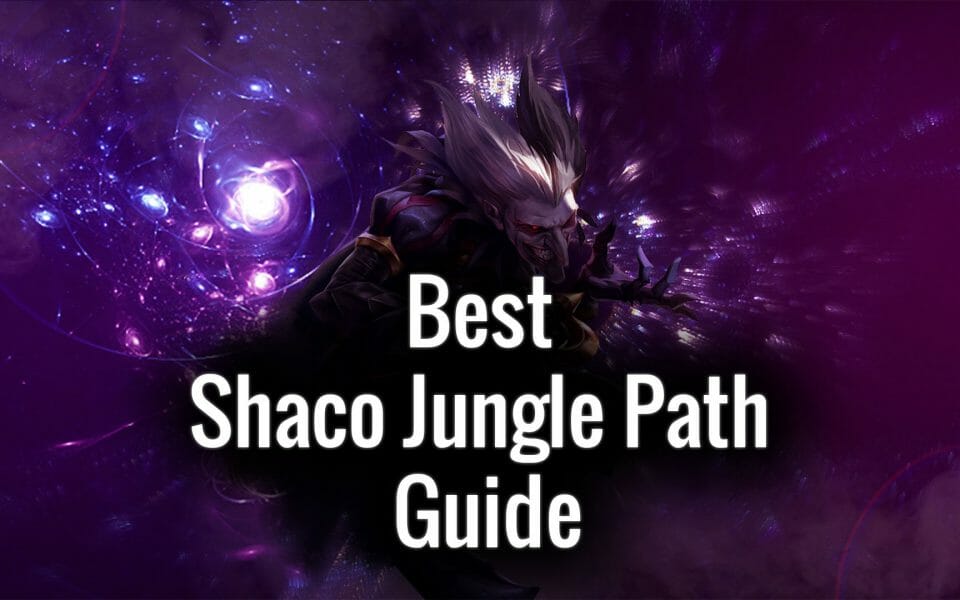 Hello and welcome to our newest jungle path guide! Today, we will be covering our favorite Demon Jester, Shaco! He is an assassin jungler that builds both Ability Power (AP) and Attack Damage (AD). Jungle Shaco performs excellently in both situations. Your play style will differ depending on your chosen route, but the fun remains the same.

Shaco is an older champion, having been in League of Legends for over a decade. Even after so many years, he is still an entertaining champion to play.

He is an excellent character to use to escape death by tricking enemy champions into chasing you in the wrong direction (juking). He surprises opponents while maintaining an easy escape route.

Strategy is a significant factor when playing Shaco because he lacks defensive stats/health. In other words, he’s "squishy" and can die easily in battle! His job is to get in, go for a quick kill, and leave the fight as soon as possible. It may sound easy, but believe me, this is no easy task! Many jungle Shaco players struggle to keep up as the game progresses.

Shaco isn’t very efficient at clearing jungle camps, but his specialty is providing support. While his teammates dedicate themselves to particular lanes, Shaco wanders between lanes to help teammates as needed. Once he arrives, his allies have a numbers advantage against the opponent, and the battle wraps up quickly. This is called “ganking,” and it’s Shaco’s specialty! He excels as a supporter, and ganking should be his main focus in the game.

There are two different approaches to Shaco’s runes and builds. One is Attack Damage (AD), and the other is Ability Power (AP). Shaco is excellent in both situations, but your playstyle will determine which one will suit you best.

Related Article: What is Lane Priority in League of Legends?

For Summoner Spells, most players decide to use Ignite and Smite, since they deal more damage. But for those who like to have an additional escape route, Flash is also a viable option.

Shaco has enormous ganking potential, and it is his biggest strength. He has stealth and deals tons of damage in a short period. He is famous for his jukes, taunting and confusing his enemies just as a real clown might do! These taunts can lure enemies into chasing Shaco in the wrong direction, allowing him to escape. His ultimate is excellent for escaping tight situations when his Q is on cooldown. Shaco can gank fairly early in the game, even on level three.

Related Article: How to Play Diana in the Jungle in League of Legends

When you are jungling as Shaco, you usually require no leash. Shaco receives help from his W, Jack in The Box, which deals damage and attracts a lot of aggro on Shaco’s behalf. The W is a must-have on level one.

Before the Buffs spawn, you should place one Jack in The Box on Blue/Red Buff at the 01:23 mark. However, don’t place Jack in The Box directly onto the Buff. Rather, place it a little out of range. In this way, when you get to the Buff, you can scare it into the Jack in The Box that you have placed before. This way, your clear speed will improve dramatically, and you will be able to get to the next side of the jungle in no time.

Once you reach the Buff, Q behind it and place another Jack in The Box behind it. This Jack in the Box will scare the Buff into the one you have already placed. This may seem rather complex, but don’t be intimidated. Once you practice the move a few times in the custom game mode, you will be able to execute it flawlessly every time.

Once you are done with the Buff, go on to the next Jungle monster. Q behind it and place Jack in The Box there. This jungle monster is the one that you should use your Smite on. This is because Shaco is a squishy champion who can not perform as well as other junglers in terms of HP. He needs to Smite it in order to survive and go for the other side of the jungle.

If you know from which side the enemy jungler will start, use the following strategy. After taking one side of your Jungle, go for counter jungle and take the enemy’s buff. Shaco deals a lot of damage in the early stages of the game, so if you encounter the enemy jungler, you will probably be able to get a buff and a kill in one fell swoop!

Shaco’s main mechanic is his spastic energy. Try to use as many auto attacks as possible before using his E. This is because Shaco’s basic attacks slow the enemy when his E is available. However, those basic attacks will not slow Shaco’s targets while his E is on cooldown.

One or two basic attacks from behind will activate Shaco’s passive ability, Backstab, and will deal more damage to his enemies. After those initial auto attacks, throw the dagger and hope for the best!

Related Guide: Everything You Need to Know about Jungle Paths in League of Legends

For Shaco’s AD build, you want to lean heavily into the assassin theme. Utilize his stealth and burst damage as much as you can!

The best Mythic item for Shaco’s ad build is The Duskblade of Drakhtarr. Ionian Boots of Lucidity suit him well, but players can swap these with Boots of Mobility or Berserker’s Greaves.

The next most suitable items are Essence Reaver, The Collector, Lord Dominik’s Regards, and Infinity Edge.

On the other hand, you could choose items like Chempunk Chainsword. This would provide more offensive power.

The Ability Power (AP) Shaco build is entirely different from an Attack Damage (AD) Shaco build, as you might expect.

The Mythic item of choice for any AP Shaco is Liandry’s Anguish, since it provides so much damage for his Jack in The Box and his Ultimate. It goes well with Shaco’s abilities.

For boots, players could equip Ionian Boots of Lucidity, but we prefer Sorcerer’s Shoes.

The next most suitable items are Zhonya’s Hourglass and Morellonomicon, which does a similar job as Liandry’s Anguish, so you can deal more damage.

Next, use items like Rabadon’s Deathcap and Void Staff to maximize the damage output.

Use Cosmic Drive, Banshee’s veil, and Demonic Embrace to help you stay alive longer in combat.

Related Guide: How to Permanently Delete Your League of Legends Account

Shaco is among the most entertaining jungle champions to play in League of Legends. This jungle path guide for Shaco will help you thrive as the Menace of Summoner’s Rift. Anyone can play Shaco, but only a careful strategist can be a master jungle Shaco player.

He is quite a versatile champion since he can be played as either AD or AP. You should try both of those builds to find which one suits you best.

Remember that a Jungle Shaco player's job is to get a quick kill and even quicker exit from the battlefield, since direct combat will burn through his low HP! Also, stay clear of any obvious Shaco counters during the picks and bans phase.

For more information on how to excel as an assassin in League of Legends, check out our guide to lethality and armor penetration.