Omnivamp: The League of Legends Stat to Live Forever? 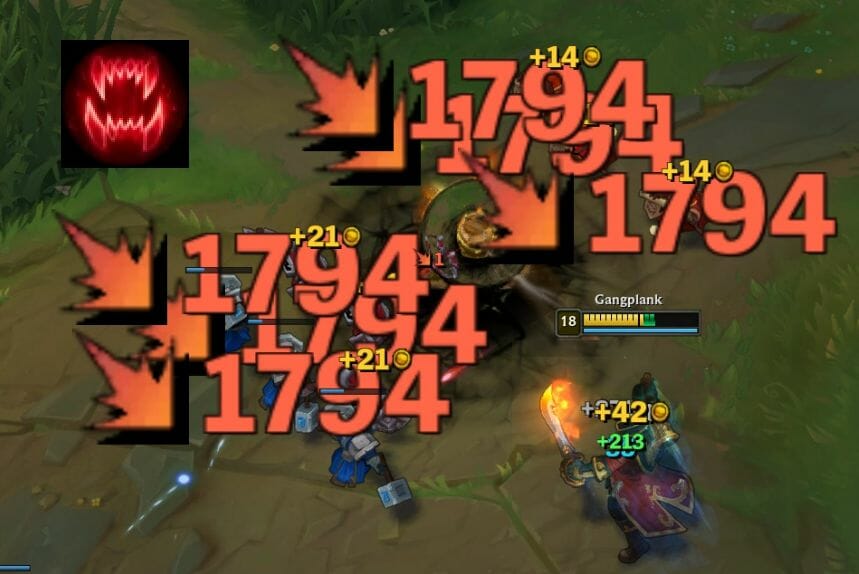 Omnivamp is one of the most undervalued and controversial stats in the game. It makes people complain that there’s too much healing, yet can at other times be a waste of a stat. So if you want to know when Omnivamp will let you live forever and when it’ll do nothing for you, you’ve come to the right place!

Omnivamp is a stat healing you from the amount of damage you deal. Akin to lifesteal, but applying to all damage dealt instead of only damage from basic attacks. The quantity of Omnivamp that you have determines how much of the damage is converted into healing.

Note: Omnivamp only applies to a third of its effectiveness to AoE damage or damage dealt by pets.

Where can I get Omnivamp?

Omnivamp is granted by items and runes. However, it’s a very scarce keyword, meaning that in order to buy Omnivamp, you must buy an item dedicated to it. The items granting Omnivamp are the following:

Note: Doran’s Blade also gives Omnivamp, but it only provides 2.5% when every other item gives between 8 and 10%. The use of this passive is to top you off in lane and to be able to regain some health off of waves in the mid game, but it doesn’t provide anywhere near enough to be listed alongside the others.

This means that of all the items, your only option to purchase Omnivamp without committing your Mythic item to it is Ravenous Hydra. Hydra is currently a niche item that has seldom been popular ever since the item rework and the transfer of its active over to Goredrinker and Stridebreaker.

And since the only non-Mythic option is overall not appealing this means that:

For AD users, the two remaining Omnivamp options become Eclipse and Goredrinker, items respectively for assassins and bruisers that also provide bonus attack damage. For AP users, that becomes a bit more complicated. Not in terms of options, that part is as simple as it gets, but regarding accessibility. Riftmaker is the only AP Omnivamp item for magic damage dealers, and being a manaless item, most mana users won’t have access to it.

Omnivamp is a stat that you have to dedicate a purchase to. There are, however, champions that innately have access to it or to a variation of it, most notably Aatrox and Kayn in his Darkin form.

In conjunction with items, runes provide a popular source for Omnivamp, with Ravenous Hunter being a popular choice for champions wanting to play on the edge and live forever.

Ravenous Hunter gives 0-6% Omnivamp based on the number of unique enemy champions taken down. Because it provides omnivamp, it counts physical damage dealt as well as magic damage dealt towards your sustain.

It’s an easy option to pick compared to item choices; however, this rune comes at the cost of doing nothing before getting a takedown. Its efficiency also remains low until it gets stacked further.

The other option is Conqueror, which provides something akin to Omnivamp by healing for a portion of the damage dealt to enemy champions when stacked (this effect is not reduced for AoE damage).

Healing in Numbers - Does Omnivamp Let You Live Forever?

Now for the main part. Omnivamp is a stat that’s hard to track the effect of, and it doesn’t help that Riot removed healing numbers from these items. That makes it easy to feel like it does either more or less than it really does. So let’s run some numbers and situations to know how it really goes.

And now for a comparison with Lifesteal:

This means that Omnivamp is exclusively about the number (and other all types of vamp as well). “Having Omnivamp” signifies nothing in itself, as this same phrase could mean either “healing for 5% of the health upon clearing one wave”, or “being able to replete 50% of the HP and having an extra health bar to play with during a fight”.

Omnivamp is only about how much one has of it. Low amounts of it will achieve nothing for the idea of being able to live forever, whereas having several sources of it can make someone much harder to kill. Yet, they will still likely be very vulnerable to hard CC, as they won't be dealing damage while stunned, rooted, or otherwise controlled. Omnivamp is only about how much one has of it. Low amounts of it will achieve nothing for the idea of being able to live forever, whereas having several sources of it can make someone much harder to kill. Yet, they will still likely be very vulnerable to hard CC, as they won't be dealing damage while stunned, rooted, or otherwise controlled.

In fact, this means that Omnivamp is more often than not a worse version of Life Steal. Per definition, Omnivamp appears to be a better form of life steal, and one point of Omnivamp brings more than one point of life steal. But the former is acquired much more sparsely, and as a result, when a champion is able to live forever, it’s achieved through direct healing and Lifesteal more so than Omnivamp.

What do Omnivamp and Lifesteal Bring?

We’ll group the two stats together here, as the same concepts apply between Lifesteal and Omnivamp. The big factor for what is made of it is the number that comes alongside the stat.

Both of these stats provide healing. On the surface, it looks like omnivamp would be best because it provides bonuses from all damage dealt. However, it only provides a relatively small amount of heal. Lifesteal on the other hand, provides much larger bonuses per item or perk. Yet, it only heals off of regular auto-attack damage.

In the end, there is no one perfect answer for which is better in terms of Omnivamp vs Lifesteal. However, there is a general guidance that champions who rely more on the auto attacks, such as ADCs, should pick lifesteal first. On the other hand, champions that rely on lots of abilities (including some ADCs e.g. Lucian) should consider at least some omnivamp if they are looking for a sustain build on their champions.

Case of a Partially Stacked Ravenous Hunter in Lane

In a solo lane, Ravenous Hunter will have between 0 and 3 stacks. On 2, it grants 2.4% Omnivamp. At the laning levels, this will equate to somewhere between 30 and 50 health regained per wave. On one hand, this amounts roughly to doubling the passive health regen. On the other hand, being targeted by two caster minions for two seconds nullifies one wave’s worth of Omnivamp.

This quantity of Omnivamp is used to recover from light trades slightly better.

ADCs aside, most champions build their Omnivamp/Lifesteal as their first item (be it Goredrinker, Eclipse, Shieldbow, Riftmaker, or Blade or the Ruined King). It is as such completed around level 9. At this stage, it will heal for about 200 to 300 HP per wave.

This primarily means that it nullifies the impact of poke or light trades, and it also allows the user to play more aggressively as they will be able to recover from bigger trades in 2-3 waves whereas their opponent won’t have that same luxury.

This is also why attack-based solo laners often build Vampiric Scepter as their first item when facing a mage.

8-10% is not enough Omnivamp/Lifesteal to warrant buying Grievous Wounds again. It’s not worth spending 800g on Oblivion Orb just to take on a Corki with Shieldbow. However, it’s often not about that alone. ADCs aside, most champions who start with a vamp item pair it up with a notable source of healing in their kit (for example, Irelia heals that much from hammering her Q on a wave due to the ability healing by itself on top of the Lifesteal from her Blade of the Ruined King), and Goredrinker also adds its healing active as well. Those cases will regularly tip it in favor of getting Grievous Wounds.

Case of over 30% Lifesteal

A champion that has that much survivability makes the game have to be played around that fact. That quantity of vamp amounts to recovering most to all of the champion’s health by taking out a single wave or jungle camp.

In fights, this equates to having access to a situational second health bar. However, situational is the keyword here: while a champion with over 30% Lifesteal will regain any health they lose within seconds, they don’t have two health bars right off the bat, and they need to act in order to obtain that regeneration. It follows that:

Those are the parameters that determine how high vamp is played around. On the opponents’ side, using burst, using CC after starting to deal damage, and grouping the abilities instead of using one in isolation as it would just be healed off. On the user’s side, positioning to deal the most damage even if it means taking some in return, but backing off when a source of burst or CC comes in range.

This is a playstyle most often adopted by Kalista and Samira.

What else Can I Do to Improve my Omnivamp Heal?

Omnivamp and physical vamp provide healing on auto attacks and on hit effects since they scale with all physical damage dealt. The best ways to improve your healing stat include increasing your max damage as well as increasing your attack speed. The harder you can hit and the more often you can hit, the better.

Lethality is not often combined with omnivamp builds. However, it is a great stat to mix in if you are facing lots of squishy champions. It can help you take them out faster. Yet, if the enemy team is mostly squishy, a lethality/critical strike build is likely your best bet to take them out in an alpha strike vs relying on the sustain of a healing build.

In fact, attack speed is one of the most important stats to combine with any sustain build, such as one relying on omnivamp or physical vamp. This is because you need a constant stream of incoming health from enemies hit. If you are struck too hard between opportunities for your own healing, you will die before you can heal back up.

Other items that provide armor or magic resistance can also be great to increase your defensive stat. Omnivamp builds are always susceptible to hard CC, so increasing your sustain to outlast limited, targeted CC will really improve your ability to survive in team fights against multiple targets.

We hope this helped you better understand Omnivamp and the tradeoff of omnivamp vs lifesteal. We also hope you've gotten a better gauge of when the stat merely has a secondary effect, versus when it allows someone to live forever. Omnivamp in League of Legends can't be used alone to provide unlimited life. However, on the right champions, combined with damage reduction, good mobility, tenacity, and attack speed, you can become an almost unkillable champion.