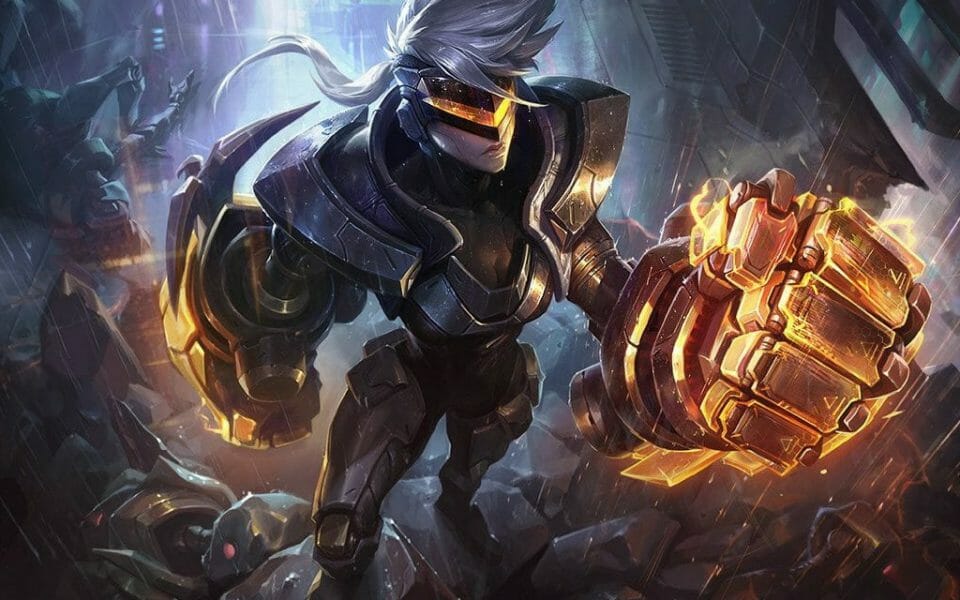 Vi is a great jungle champion and top laner. Built as a bruiser, she can both initiate team fights as well as solo kill most champions. We hope this Vi guide will help you make the best of this incredible champion!

Vi’s ability to easily initiate and dive on her targets before pummeling them into dust is what makes her an amazing champion. She can cross great distances to jump on her target with Vault Breaker. Not only that but in team fights, she can dive the enemy backline and knock up their highest damage dealer using her ultimate Assault and Battery. Once she’s on her target, she can deal large amounts of damage from her Denting Blows passive. Additionally, when in lane or when clearing large jungle camps, her Vi Excessive Force ability lets her next AA deal massive AoE damage behind her target, allowing you to clear many enemies at once.

Vi’s passive gives you a temporary shield whenever you hit an enemy with an ability that scales with your maximum health. It provides extra sustain when farming up in the jungle or in lane. Additionally, it will proc the shield on your initiate, helping you survive when the fight starts.

Vi can channel to increase the damage, speed, and range of her dash ability. She can pass through minions and will apply a small knockback and one stack of Denting Blows when she strikes a champion. This is Vi’s main initiation, escape, and ganking ability.

Tricks to Ganking with Vi and Vault Breaker

Using this ability causes Vi’s next basic attack to deal damage to enemies in a cone behind her target. It is great for clearing large camps and waves of minions.

Vi’s ultimate causes her to dash towards her target, knocking aside any enemies in her path. Vi is immune to all crowd control while dashing. In the late game, when the enemy team’s tanks are peeling for their carries, this ability will get you past all of their defenses, so you can wreak havoc in their back line.

For a jungle build, you need to take smite. It’s not very complicated. Without it, clearing jungle camps will be difficult and you won’t be able to secure Baron and Dragon.

Flash is essential on almost every champion. It can save you in tight spots and can also be used offensively to Flash in and close the gap before dashing forward to engage.

Teleport will allow you to get back into lane quickly if you are forced to back for health or to purchase a better item. Additionally, in the mid and late games, you can split push effectively without worrying you can’t make it to a team fight.

Flash is essential on almost every champion. It can save you in tight spots and can also be used offensively to Flash in and close the gap before dashing forward to engage.

As a starting item, we would recommend Hunter’s Machete in the jungle and Doran’s Shield in the top lane, both for their added sustain early. You need to play a little safe until you are at least level 3 and have unlocked each of your basic abilities.

For the best late-game item builds, check out our Vi build guide, which contains the best item builds versus a variety of team types (i.e. tanky, CC heavy, AD, etc…). The data there is built entirely from real match data and is updated often.

Some great items to build include Ravenous Hydra and Sterak's Gauge. In particular, Ravenous Hydra is a great item because it increases your damage range and provides a solid boost to your sustain with omnivamp.

Jungle: As the jungler, it is your responsibility to help your lane mates get ahead by ganking them when their enemies push too far forward. Plan out your jungle path well to maximize your gold income and ganking opportunities. Fully channel your Vault Breaker to engage during ganks. Try to save your ultimate in case the enemy attempts to Flash away or tries to CC you.

Top: Focus on getting CS and managing the minion wave position. Use Excessive Force to clear waves and poke the enemy top laner without taking minion aggro. If your opponent has used their Flash or lacks an escape, use your high mobility to punish them when they push too far.

Vi excels in team fights, where it’s her job to dive the opposing team’s back line, taking out their carry as quickly as possible. This will cause their front lines to fall apart as they try to cover their carry, which in turn will allow the rest of your team to follow. Make sure your team is aware you will be diving. You will be quickly targeted, so if your teammates are not ready to follow you in, you will accomplish nothing.