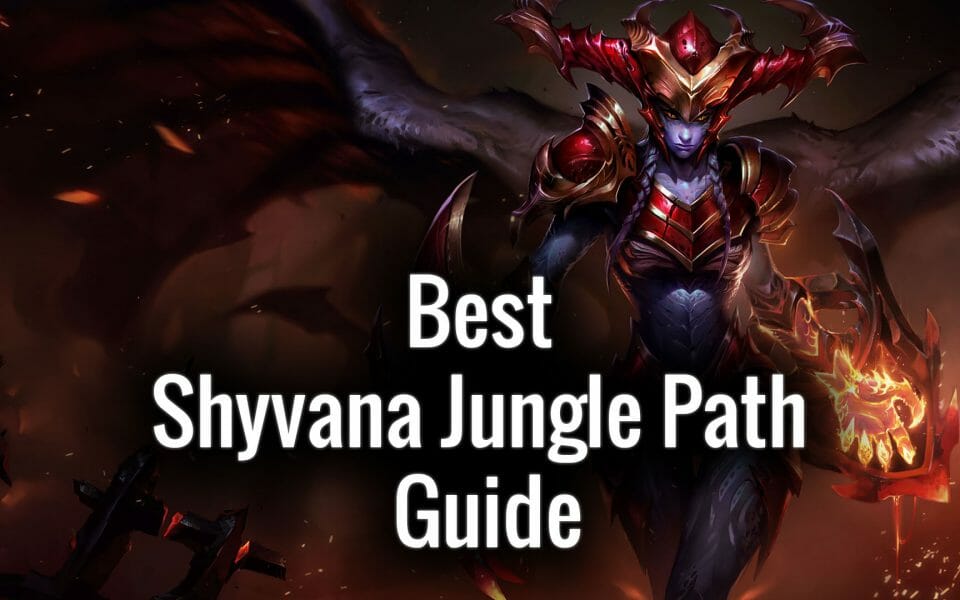 Hello and welcome to our newest Jungle Path Guide. On today’s menu, we have Shyvana.

Shyvana is a powerful bruiser and fighter jungle champion. She has been praised as the “most effective tactics available” (META) in season 12 due to the mid-season update, which enhanced her magnificently. The Bruiser META is hot right now, and we have again entered a period where Bruisers and Top lane champions will once again dominate The Summoner’s Rift. The phrase, “Don’t hate the player, hate the game!” comes to mind amidst complaints that Shyvana is too powerful. Be realistic: until another update rebalances the game, players should take advantage of this champion.

Let’s talk about Shyvana for a bit. Shyvana is an incredibly strong jungler that can build tank items, bruiser items, and even Attack Power (AP). Her AP scaling is incredible, so you can't know what to expect when you spot Shyv on the enemy team.

As we said, Shyvana can go for many builds, and they all require different runes. We will tell you the best runes and masteries for every build that can work for Shyvana.

The Bruiser build is the most common Shyvana build in League of Legends. The Runes and Masteries of choice are Precision, the main Rune setup; and Inspiration, your secondary Rune setup.

Another fantastic build for Shyvana is to go full AP. This build allows Shyvana to one-shot even the most challenging opponents and deals ‘’Tons of Damage’’. I recommend this build to players who are bored with the Bruiser build but still want to be included in the damage-dealing wing of the team. The AP build is solid, but since the Bruiser is currently the META, the AP build falls a little behind The Bruiser build.

You can start the game with a few combinations while playing Shyvana. Our favorite is W-E-Q, but a popular way to go is Q-E-W (these being shorthand for the moves activated by pressing letter keys). We prefer the first option since it provides damage, movement speed, and attack speed. These three features are important when playing jungle, since it allows Shyvana to clear camps faster and move between them more quickly.

Related Article: How to Quick Cast in League of Legends

Which Summoner Spells work on Shyvana? All of them!

We have seen players that, apart from Smite, take Flash, Ignite, Ghost, or Exhaust. It’s hard to choose a bad Summoner Spell for this versatile character. If you want more damage, then go for Ignite. If you want to escape, then the Flash is an excellent choice. Ghost and Exhaust have similar effects.

Among these options, we favor Exhaust. We recognize the need for Exhaust, since Shyvana does not excel at crowd control. Exhaust helps with ganking. This Summoner Spell makes killing much easier, since the enemy doesn’t have the time to run off behind the turret. Thus, the chances for diving are reduced. The fewer dives, the fewer chances for human error.

Ganking is a tricky maneuver to pull off. To successfully gank, you must allow your character to wander between lanes as your teammates are dedicated to particular lanes. You must use your judgment to help the right teammate at the right time. In an ideal gank, your allies gain a numbers advantage against the opponent when you arrive, and the battle wraps up quickly.

Shyvana has a good ganking potential, but her true talent is Jungle clearing. She is among the fastest champions in League of Legends when it comes to clearing Jungle camps.

She is quite a simple champion to play with only one targeted ability. (Her ultimate is targeted as well, but the point of her ultimate is not to hit the target but rather to alter her own stats.)

When it comes to ganking, the thing that sets Shyvana apart is how soon she can gank. Other characters must be diligently prepped and upgraded before they can pull off such a move, while Shyvana can even solo Drake at level 3.

However, the ganks themselves can be a bit tricky if you don’t arm yourself with an Exhaust. Shyvana’s poor crowd control can hold a player back!

Your setup has to be perfect to execute a gank with Shyvana. A perfect setup is not easily done, but since Shyvana’s jungle clear is so good, you can try to gank very often and not fall behind on farming resources or meeting objectives.

Ideally, you will start your jungle path with Shyvana starts on the blue side. She benefits from cooldown reduction and doesn’t need to worry about overusing her abilities since she doesn’t have mana, energy, or any form of consumable asset apart from rage. Rage is only used in Dragon form, so running out of ammo is not a hazard in the early game.

Shyvana’s inexhaustible abilities make her beginner-friendly champion. They allow a player to focus on macro strategy instead of worrying about mana, energy, and other fine details.

Start by attacking Blue Buff. With more experience, you will be able to get both Blue Buff and Gromp at the same time, even without a leash. But for starters, you should get a leash and finish The Blue Buff, then go for Gromp. Afterward, go for The Wolf Camp in your jungle path as Shyvana, a no-brainer for Shyvana because her W allows her to kill multiple jungle monsters at once.

The Raptors are next, and just like the Wolves, they are a perfect target for Shyvana’s widely-sprayed attack. You should try to hit the smaller raptors, since they deal the same damage as the big one but have a lot less HP.

Your next Shyvana jungle path target should be the Golems. Attack Red Buff at the end. Shyvana has incredible clear speed, which always allows her to be the first to reach the Scuttle Crab.

If you see your enemy somewhere on the map, you can either go for a gank, the other Scuttle Crab, or even Dragon at level 3. Trust me, Shyvana can take solo Drake at level 3. Arm yourself with a few potions and a Smite, spam your abilities, and ensure no one is coming. The Dragon won’t know what hit him!

The Mythic item of choice for Shyvana is The Frostfire Gauntlet.

A Demonic Embrace is a must-have item on her too.

Other items can be standard tanky items like Warmog’s Armor, Thornmail, Force of Nature, and Raduin’s Omen.

Boots for Shyvana can be Steel Plated Caps, Mercs Treads, or even Sorcerer’s Shoes. We prefer the tankier options.

Related Guide: How to Get Free Champions in League of Legends

Shyvana is a great split-pusher and even better objective taker. Your primary focus is to take as many objectives as possible for your team.

Since Shyvana has poor crowd control, ganks should not be a priority when using her typical build. However, if you decide to go for Exhaust, this changes. With Exhaust, Shyvana can thrive in ganks and when counter jungling in LoL.

Remember always to have your Rage maxed out, so your ultimate is ready to go when you need it. In some extreme cases, you can use your ultimate to escape tight situations, since it can go over walls.

Summary of the Best Shyvana Jungle Path and Gameplay Guide

Shyvana is a fantastic jungler who is currently META. She is beginner-friendly, since she is straightforward to use. Shyvana doesn’t use mana; instead, she gathers Rage for her ultimate. Since Shyvana doesn’t have good crowd control, we recommend using Exhaust while playing her.

The amazing thing about Shyvana jungle in League of Legends is that players can decide if they want to build a tanky champion or an AP champion. She excels in both of those roles. She is excellent at split-pushing and has one of the fastest jungle camp clears in the game. This makes executing Shyvana's jungle path relatively simple.

For more great League of Legends advice on how to play with Shyvana, you may want to check out our guide to Shyvana counters to see who is best counter her and who she counters well.